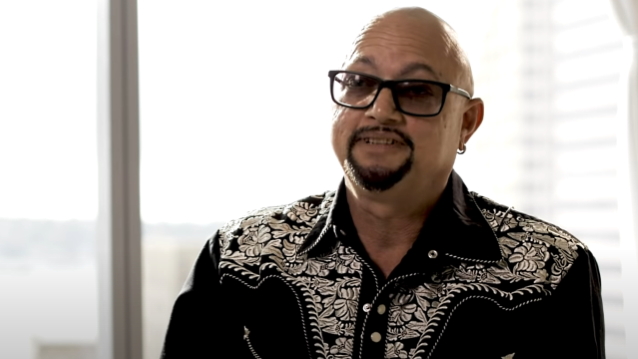 Geoff Tate says that "there's not really a motivation" for QUEENSRŸCHE's classic lineup to ever reunite.

Tate discussed the prospect of a QUEENSRŸCHE reunion during a new interview with 80's Metal Recycle Bin. He said (as transcribed by BLABBERMOUTH.NET): "QUEENSRŸCHE had a really good run. Not many bands can last 30 years. And we did, and we wrote a lot of really cool music that I'm very proud of. We visited a lot of countries and played a zillion shows, made a lot of friends. It was a really good run and I'm proud to have done that and grateful for everybody in the band who stuck it out all those years.

"I think there's a time to say goodbye to that and move on to other parts of your life and do things that you wanna do. The older I get, I created a bucket list of things to do in my life, and one of 'em was playing the 'Rage For Order' album in its entirety on a concert tour. So I'm doing that right now, accomplishing my bucket list. I wanna go to as many different countries as I possibly can. This year I'm going to two new ones — Costa Rica and Peru, which I'd never been to before. That'll make it 64 and 65 countries I'm performing in.

"So, getting the band back together? For what?" he continued. "If we were gonna make an album together and get on that kind of level, that would be a really difficult thing to do, I think, but not impossible. It would be more likely that we'd get together and do a concert tour, which we've been offered, and certain people have declined it. So, I don't know. There's not much of a motivator at this point within the band, the people that were in the band. There's not really a motivation. If it's not money and if it's not creatively [fulfilling], why get together?'"

This past January, Tate told SiriusXM's "Trunk Nation With Eddie Trunk" that it was highly unlikely a QUEENSRŸCHE reunion would ever materialize. "I'm honestly not really expecting that to happen, basically because we've been offered just obscene amounts of money to get back together and do one tour — one tour and we'd never have to tour again," he said. "And a couple of people in the band turned it down; they're not interested in doing it. So that would really be, I think, the only motivation that would get everybody together was an obscene amount of money. But that didn't work, so [laughs] there's really no hope for it after that, I think… Money is not the motivator, and getting together for an artistic dream isn't a motivator either, so what do you have? You have nothing. Obviously, both camps are happy in the position they're at. I know for myself, I love my life — I love what I'm doing and I love traveling and playing music for people. And so far, I'm still kicking it at 63, still happy and healthy."

Geoff went on to say that he is fine with the prospect of never returning to QUEENSRŸCHE and continuing to pursue his solo career and other projects for the rest of his time as a performing artist.

"We did hold it together for years and years and years," he said. "It was a really, really tightly run ship and it was very lucrative and we had a lot of great records and did a lot of world touring and made a lot of friends and played a lot of music together. And we had our time, and I'll aways be grateful for that time that we had. That was a time, and it doesn't mean that that time has to go on forever. There's new times to be had and there's more music to be made, there's more songs to be sung and more audiences to play music for."

Tate has gone back and forth on the subject of a reunion with QUEENSRŸCHE, telling The Rock Vault in November 2019 about the possibility of rejoining his former bandmates: "I think that would be something that makes sense, and I think it would be an interesting thing to do, if everybody could get in the same room and actually talk to each other." However, just eight months earlier, he dismissed the chances of a QUEENSRŸCHE reunion, telling Greece's "TV War" that he had "no interest in that. No. Not at all. [I have] absolutely no reason to," he said. "I don't need the money. That'd be the only reason to do it. Maybe if they paid me, like, 10 million dollars or something like that. [Laughs]"

Last year, current QUEENSRŸCHE singer Todd La Torre told "Paltrocast With Darren Paltrowitz" about the chances of Tate's return to QUEENSRŸCHE: "It's funny. I always hear, 'There'll definitely be an all-original lineup reunion. Every band does it.' And I'm thinking, if you knew what I know, I don't think that's gonna happen. And other than the optics of it, why? What's the point? We saw for 15 years what it sounded like."

In October, Rockenfield, who stepped away from QUEENSRŸCHE's touring activities in early 2017 to spend time with his young son, filed a lawsuit against Wilton and Jackson, alleging, among other things, breach of contract, breach of fiduciary duty and wrongful discharge. Rockfenfield also claimed that Wilton and Jackson did not include him in the recording QUEENSRŸCHE's latest album, "The Verdict", "despite his availability and willingness to participate."

The drum tracks on "The Verdict" were laid down primarily by La Torre.