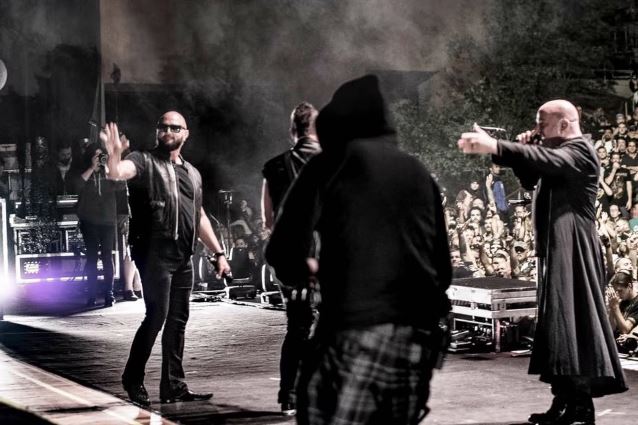 GEOFF TATE Was 'Honored' To Be Asked To Sing With DISTURBED

Former QUEENSRŸCHE and current OPERATION: MINDCRIME frontman Geoff Tate joined DISTURBED on stage on August 20 at the Pain In The Grass festival at the White River Amphitheater in Auburn, Washington to perform the DISTURBED song "Who Taught You How To Hate". They were accompanied by ALTER BRIDGE guitarist Mark Tremonti and SAINT ASONIA bassist Corey Lowery.

Speaking to Glide Magazine, Tate said about the collaboration: "That was fun, very fun. That venue, White River Amphitheatre, is a wonderful venue and it's a wonderful stage and it's one of those technologically together places that sound incredible. So it was a real pleasure playing in that environment. And DISTURBED is a great band, a super-tight band that is fun to play with, and they were very giving to allow me to step on their stage and sing one of their songs with them. I felt so honored to be in that position and humbled that they would ask me to do that. I was very happy for that and I'm very happy for the success of their project and their album is doing really well and they are having a really big year this year."

"Who Taught You How To Hate" is taken from DISTURBED's sixth studio album, "Immortalized", which was released in August 2015.

"Resurrection" is the second part of Tate's musical trilogy and is the follow-up to last year's "The Key".