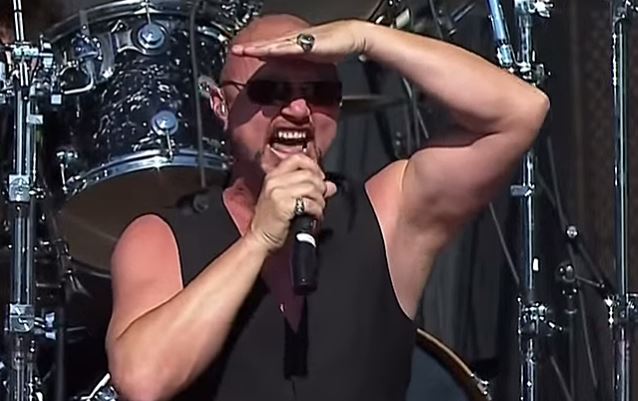 While answering questions from fans on Twitter this past Saturday (October 4),former QUEENSRŸCHE singer Geoff Tate was asked: "Not including yourself, who is your favor[ite] vocalist?" He replied: "Still me"

In a recent interview with the Daily Herald, Tate admitted that he was perplexed as to why his former bandmates fired him from QUEENSRŸCHE in June 2012, a move which instigated lawsuits over the dismissal and sparked a protracted legal fight over the rights to the QUEENSRŸCHE name.

"And why would you fire the main writer? Why would you do that — and the person who is the face of the band and is the identifying key figure in the success of the group? I don't mean that to sound egotistical because it's not. It's just the truth. Why on earth would you do that? It sounds like career suicide, especially at our ages. We're all in our 50s. ... Why would you break apart this successful thing at this point in life? I can see if you had some grand plan that, if you're in your 20s and you had all this time and all these years ahead of you. But we're all in the last decade of our working lives. It just sounds like madness to me."

Tate, who will continue with a new band called OPERATION: MINDCRIME while his former bandmates carry on recording and touring as QUEENSRŸCHE, believes that the settlement agreement will make it clear to fans the new QUEENSRŸCHE group — featuring Todd La Torre on vocals — is drastically different from what it was up to Geoff's dismissal in 2012.

"I think (the settlement) makes people, or at least spells out for them, what actually is the situation," Tate said. "And by that I mean I wrote the majority of the music in QUEENSRŸCHE all of these years. And Chris [former guitarist Chris DeGarmo, who left QUEENSRŸCHE in 1998], when he was in the band, wrote the majority of the music in the band. So he and I were the ones that came up with the concepts and the soundscape and the image of the band. Everything that people associate with QUEENSRŸCHE, he and I did that. We were responsible for that. So what you have now with him not in the band and me not in the band, is you have the people who were responsible for what people associate with QUEENSRŸCHE not in QUEENSRŸCHE anymore. So QUEENSRŸCHE means something completely different now than it ever has before. See what I'm saying?"

OPERATION: MINDCRIME was scheduled to enter the studio last month to begin recording the trilogy project, which Geoff has been working on for the past two years.

“@MarkStormSCW: @geofftate Not including yourself who is your favor vocalist?” Still me