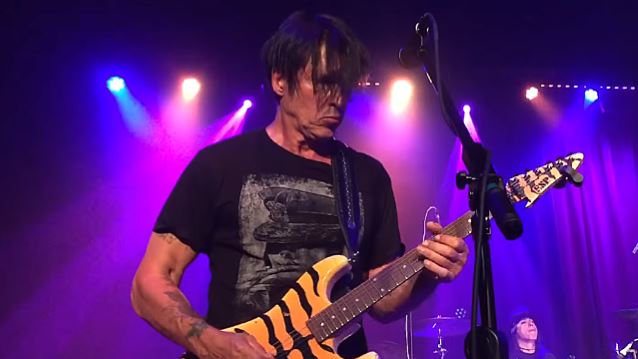 George Lynch spoke to TeamRock about the reunion of the classic lineup of DOKKEN. The group will play its only U.S. show on September 30 at Badlands Pawn Guns Gold And Rock 'N' Roll in Sioux Falls, South Dakota. The concert will be a warm-up gig for the band's six-show Japanese run dubbed "Unleashed In The East".

Asked how he feels about the DOKKEN reunion, George said: "Well, um, it's a mixed bag. It's complicated. But the overarching feeling I have is I'm glad it's happening for the right reasons. One of which is money. But another of which is putting a nice bow and closure on an important part of our professional and artistic lives, and also for people who care about this kind of music. Because it was important to their lives. And with all the bad things going around it's nice to see that people can come together sometimes. I just think it makes people feel good. I know it's a drop in the bucket, but, you know, I'll take it."

George also addressed the well-publicized tension between him and DOKKEN frontman Don Dokken and how it might affect DOKKEN's current reunion. He said: "You know, I'm trying to stay positive with all this so I don't really want to get into what could go wrong with things. I would just say that we pretty much don't have a relationship at this point. The only time we see each other is when we're on the road and maybe LYNCH MOB is playing the same bill with DOKKEN. Otherwise, there was an hour-long meeting at a management office and a few emails. But beyond that there really hasn't been any communication. So there is no relationship."

DOKKEN will have one new song to play for fans when the group begins performing this fall. It's shaping up to be a full-band collaboration between Dokken, Lynch, Pilson and drummer Mick Brown — the latter of whom still plays in the band's current lineup.