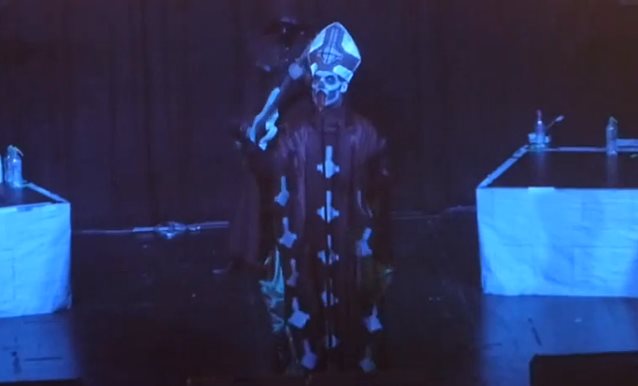 Fan-filmed video footage of GHOST's November 13 performance at the O2 Academy in Birmingham, England can be seen below.

GHOST's new covers EP, "If You Have Ghost", will be released on November 19 via Loma Vista Recordings. The five-track EP was recorded and produced by Dave Grohl (FOO FIGHTERS, NIRVANA),and includes cover versions of songs by ROKY ERICKSON, ABBA, ARMY OF LOVERS and DEPECHE MODE, plus a live version of the GHOST offering "Secular Haze", recorded in Brooklyn earlier this year.

Outside North America (with the exception of Scandinavia),Spinefarm Records will be the new releasing partner for Loma Vista on all GHOST recordings, including the new EP and previous album. Spinefarm releases are distributed through Caroline/Universal in all territories, including the U.K., where a November 18 date has been confirmed for the release of "If You Have Ghost"; the EP release date in other territories will vary slightly.

"If You Have Ghost" will be available on CD, 12-inch vinyl and digitally. Those who pre-order the EP will receive an instant free download of "Secular Haze - Live".

"Infestissumam" has sold around 41,000 copies in the United States since its April release.