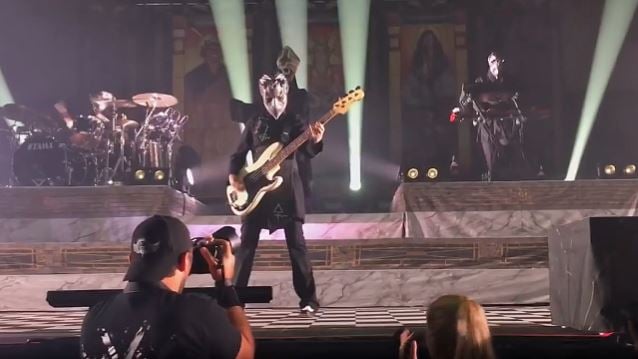 Swedish occult rockers GHOST are believed to have enlisted Megan Thomas from the New York-based all-female LED ZEPPELIN tribute band LEZ ZEPPELIN to play bass on their "Popestar" North American tour, which kicked off September 16 at Main Street Armory in Rochester, New York. As with all the members of the band, the new member's identity has not been divulged and she is just one of the five Nameless Ghouls behind singer Papa Emeritus.

A fan-posted photo from a recent GHOST signing reveals the new member has a distinctive "X" tattoo on her right middle finger. It appears to be a match for Megan's tattoo, as seen in the picture below. Meganhas also been photographed sporting what appears to be the same ruby ring on her left index finger that is worn by GHOST's new bassist.

None of the bandmembers' real names have ever been revealed, although Papa Emeritus is believed to be Swedish rock musician Tobias Forge. The other five musicians are simply known as Nameless Ghouls.

Since none of the musicians in the band are ever identified, personnel changes in the group have gone unannounced. It is believed, however, that the lineup has changed a few times over the years.

One of the Nameless Ghouls told Jägermeister about attempts to reveal the GHOST bandmembers' true identities: "We keep our identities as secret as we possibly can, of course, but at some point it's bound to happen, some things that are not really optimal for us, of course. But the identity part is always gonna be, for as long as can take it, it's gonna be a hassle in many ways, and I think we have managed to keep it below the radar, for the most part, at least."

GHOST is touring in support of its new EP, "Popestar", which was released on September 16. The effort features covers of songs from bands like ECHO & THE BUNNYMEN and EURYTHMICS along with a new original tune called "Square Hammer".