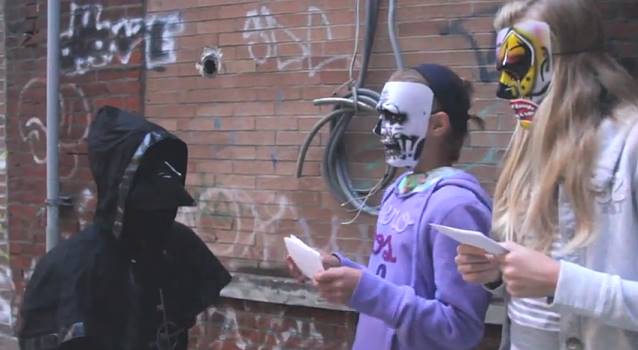 "Kids Interview Bands", a video interview series hosted by 7th-graders Olivia and Connie, conducted an interview with one of the nameless ghouls from Swedish occult rockers GHOST on October 7 at the Newport Music Hall in Columbus, Ohio. You can now watch the chat below.

GHOST will release a covers EP, "If You Have Ghost", on November 19 via Loma Vista Recordings. The five-track EP was recorded and produced by Dave Grohl (FOO FIGHTERS, NIRVANA),and includes cover versions of songs by ROKY ERICKSON, ABBA, ARMY OF LOVERS and DEPECHE MODE, plus a live version of the GHOST offering "Secular Haze", recorded in Brooklyn earlier this year.

Outside North America (with the exception of Scandinavia),Spinefarm Records will be the new releasing partner for Loma Vista on all GHOST recordings, including the new EP and previous album. Spinefarm releases are distributed through Caroline/Universal in all territories, including the U.K., where a November 18 date has been confirmed for the release of "If You Have Ghost"; the EP release date in other territories will vary slightly.

"If You Have Ghost" will be available on CD, 12-inch vinyl and digitally. Those who pre-order the EP will receive an instant free download of "Secular Haze - Live".

GHOST's cover version of ROKY ERICKSON's "If You Have Ghosts" can be streamed in the YouTube clip below.

In Europe, meanwhile, GHOST will join forces with ALICE IN CHAINS for a run of dates that start in the U.K. on November 9, before heading across to mainland Europe.

In a recent interview with ARTISTdirect, a nameless ghoul from GHOST said about "Infestissumam": "It feels way more theatrical and bombastic. In many ways, 'Infestissumam' is thematically a continuation of where [the debut album] 'Opus Eponymous' began. Whereas a lot of the thematic ideas we have in mind for upcoming albums might differ a little bit and will go in another direction. That's not to say we won't sing about the things we do and not have makeup. I'm just saying it will evolve into other things in the future. On this record, I feel like we're doing a lot of things we intended to do on the first naïvely being we could pull off a show like that at that point — which we couldn't. Now, we have a little bit more muscle. The attendance is probably more in accordance with being able to present a show like that."

"If You Have Ghosts" audio stream: