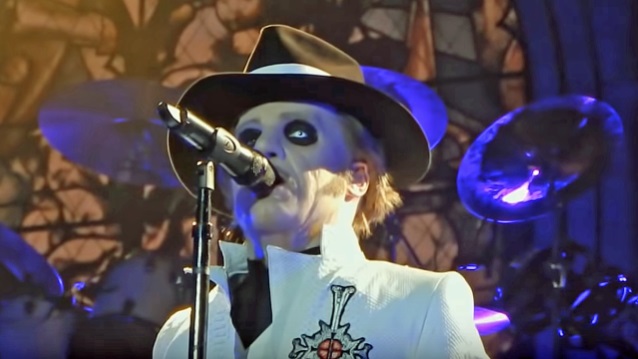 During a brand new interview with Meltdown of Detroit, Michigan's WRIF 101.1 FM radio station, GHOST leader Tobias Forge spoke about the keys to being a successful artist in the current musical climate. He said (hear audio below): "I think that there are numerous things. Of course, there's some of basic DNA in the idea of the so-called shtick, repertoire, our product that I think makes it digestible. But I know a lot of bands that have made digestible product, so it doesn't necessarily always have to do with how good you are or how good you are at writing or how good you are at performing; it also has a little bit to do with timing and also the amount of work you do to back your product up.

"The reason for a lot of bands not making it is because they don't really understand that your job is sort of divided into two different things," he continued. "It's one thing creating it… It's like being an architect but also a construction worker. So you have to sort of split your mind into two where you're being creative and you draw the house and you do all that, but there's also a lot of paperwork that needs to be done, that you might have help from people — your management — to do, but there's still a heckload of decisions that need to be made. And then you have to build it as well. So you have sort of skip the creative parts and then just take your white gloves off and then start building as well. And I think there's a lot of artists that [don't] really get that — they don't understand the amount of actual labor you also have to put into it. And a lot of artists that actually also get the opportunity to do it find it so uncomfortable that they, in some way or form, bow out."

GHOST played the first official show of the "Rats! On The Road" U.S. tour on May 5 at Riverside Municipal Auditorium in Riverside, California. In addition to the previously released new single "Rats", which opened the concert, GHOST played four more songs from the upcoming album, including "Faith", "Dance Macabre", "Miasma" and "Pro Memoria". "Miasma" featured a saxophone solo from Papa Nihil, the aged "original" Papa Emeritus.

The band broke its show up into two sets, with the first featuring 12 songs and the second consisting of 11 numbers. The group spread out the new material across both sets, interspersed with fan favorites and hits like "Cirice", "From The Pinnacle To The Pit", "He Is", "If You Have Ghosts" and show closer "Square Hammer".

The band has expanded its onstage lineup to include at least eight musicians, not including the guest appearance from Papa Nihil.