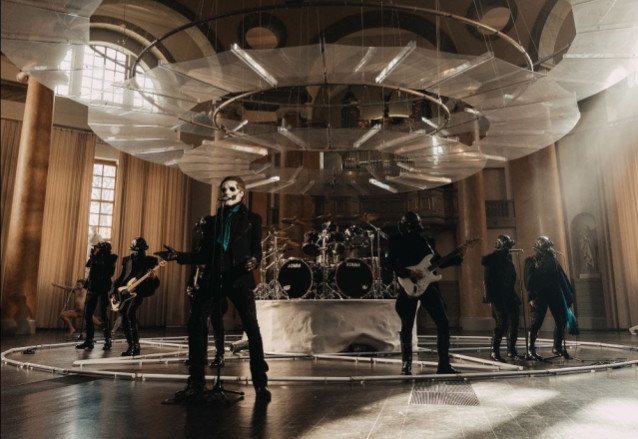 GHOST mastermind Tobias Forge told Metal Hammer magazine about "Spillways": "This is an elegy for the darkness that most people have inside. When you have a dam, spillways are the run-offs so the dam won't overflow. That darkness inside us needs to find its way out."

"Spillways" is taken from GHOST's fifth album, "Impera", which sold 70,000 equivalent album units in the U.S. in its first week of release to land at position No. 2 on the Billboard 200 chart. It marked the third top 10 album — and fifth top 40-charting set — for the Swedish act.

GHOST will embark on the next North American leg of "Imperatour" next month. The trek will see the Grammy Award-winning Swedish theatrical rock band headlining 19 arenas across the U.S. and Canada (plus an appearance at Virginia's Blue Ridge Rock Fest),kicking off August 26 at San Diego's Pechanga Arena and running through September 23 at the Resch Center in Green Bay. Support on all dates (with the exception of Green Bay which will feature support from CARCASS, and the Blue Ridge Rock Fest) will come from Grammy Award-winning band MASTODON and SPIRITBOX.