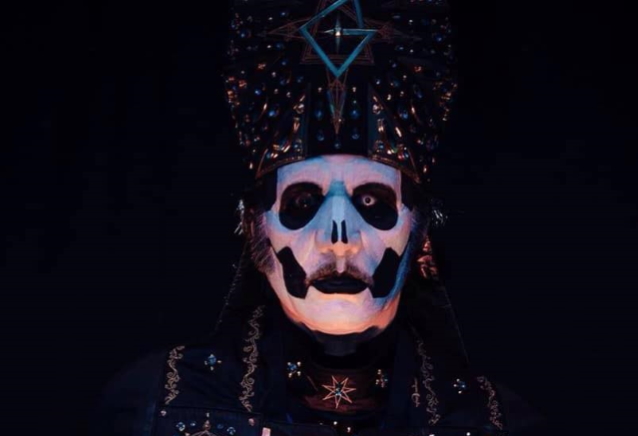 GHOST To Enter Studio In January; New Album Tentatively Due In Late 2021

On October 16, Sweden Rock Magazine met Tobias Forge in the studio in Sweden where he is writing and doing pre-production for GHOST's fifth album.

"The plan now is for me to be here [in the studio] writing for another two months until Christmas," Forge said, according to an English-language translation provided to BLABBERMOUTH.NET by Sweden Rock Magazine. "The idea is for the album to be recorded in January. The actual recording will last around six weeks and then there's two to three weeks of mixing and mastering. So sometime in March the record should be finished, but it won't be released until after the summer. As it looks now, knock on wood, we will then go on tour. We won't release an album until we know that we are actually going on tour. The album release will coincide with the start of a tour. Of course, we could announce an album release date and then, for some reason, it might not be possible to tour, but that's a whole other matter."

Read the full interview in Sweden Rock Magazine's November 2020 issue, due out on November 24.

Earlier this month, a number of media outlets erroneously reported that GHOST would be issuing a new album this winter. The report was based on an interview that Forge gave to Sweden's VK.

This past March, at the final concert of GHOST's "Prequelle" album cycle in Mexico City, the band introduced the new character who will front the act for its next LP phase: Papa Emeritus IV.

Four years ago, GHOST became the first Swedish rock band ever to win a Grammy — 2016's "Best Metal Performance" for the song "Cirice".