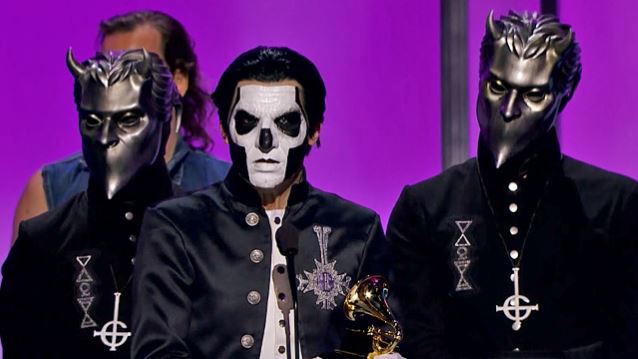 Swedish occult rockers GHOST were honored with a Grammy in the "Best Metal Performance" category in the pre-telecast ceremony at the 58th annual Grammy Awards, which is being held tonight (Monday, February 15) at the Staples Center in Los Angeles. GHOST was nominated for the song "Cirice", from its 2015 album "Meliora".

In his brief acceptance speech, GHOST frontman Papa Emeritus III said: "Hello. We are GHOST. Thank you so much for this. This is a big, big thing for us, obviously. And, you know, a nightmare has just turned into a dream. So… Thank you all for that. Thank you, everybody involved, and thank you for voting. Now go party."

Speaking about the nomination, one of GHOST's nameless ghouls told Grammy.com: "Being nominated for a Grammy is obviously a big honor for any band or artist — obviously, ourselves included. Especially for us, as a Swedish band, it feels extra honoring, I guess. Especially us maneuvering in the rock genre, where traditionally it's usually British or American bands."

He added: "To my knowledge, we are the first Swedish rock band to ever be nominated for a Grammy, which is also the reason why when we got the news that we were nominated, I just got a text saying, 'You're nominated for a Grammy.' In Sweden, we have another prize called Grammis, which, internationally, is referred to as the Swedish Grammy. So when I got the text, I told my friend next to me that we were nominated for a Grammis. So it took like an hour later until I actually got it confirmed that they were actually talking about a Grammy, not a Grammis, which was a very mind-boggling experience. So winning or not winning, just being nominated is a big honor, and for us it's definitely a sign of recognition that we can suck on for the rest of our lives."

As the only peer-based music award, the Grammy Awards are voted on by The Academy's membership body of creators across all disciplines of music, including recording artists, songwriters, producers, and engineers. Final-round Grammy ballots were mailed December 16.

Last year's Grammy in the "Best Hard Rock/Metal Performance" category went to TENACIOUS D, who were nominated for their cover version of the DIO classic "The Last In Line", from the "Ronnie James Dio - This Is Your Life" tribute album.

TENACIOUS D beat out several notable metal acts, including ANTHRAX, which was nominated for its own contribution to "Ronnie James Dio - This Is Your Life", a cover of the BLACK SABBATH classic "Neon Knights".