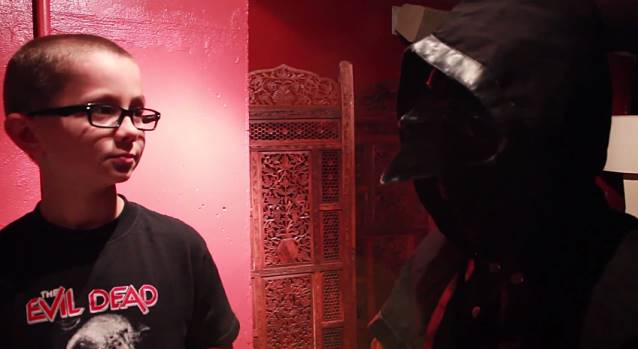 9-year-old Elliott conducted an interview with a nameless ghoul from Swedish occult rockers GHOST on May 17 in New York City. Elliott asks the nameless ghoul if GHOST frontman Papa Emeritus II is more evil than Darth Vader, what would happen to New York City if Papa became mayor, what it was like meeting Ace Frehley and more. You can watch the chat below.

GHOST was honored in the "Best Hard Rock/Metal" category at the Swedish Grammis awards (Swedish Grammy equivalent),which was held on February 19 at Cirkus in Stockholm. The bands were all nominated for their most recent releases, all of which came out during 2013. GHOST was also honored with the P3 Guld award (for "Infestissumam") from Swedish radio station P3 in the "Best Rock/Metal Album Of The Year" category. The winners were announced on January 18 during a live awards ceremony broadcast from the Scandinavium in Gothenburg, Sweden.

In an interview with ARTISTdirect, a nameless ghoul from GHOST said about "Infestissumam": "It feels way more theatrical and bombastic. In many ways, 'Infestissumam' is thematically a continuation of where [the debut album] 'Opus Eponymous' began. Whereas a lot of the thematic ideas we have in mind for upcoming albums might differ a little bit and will go in another direction. That's not to say we won't sing about the things we do and not have makeup. I'm just saying it will evolve into other things in the future. On this record, I feel like we're doing a lot of things we intended to do on the first naïvely being we could pull off a show like that at that point — which we couldn't. Now, we have a little bit more muscle. The attendance is probably more in accordance with being able to present a show like that."