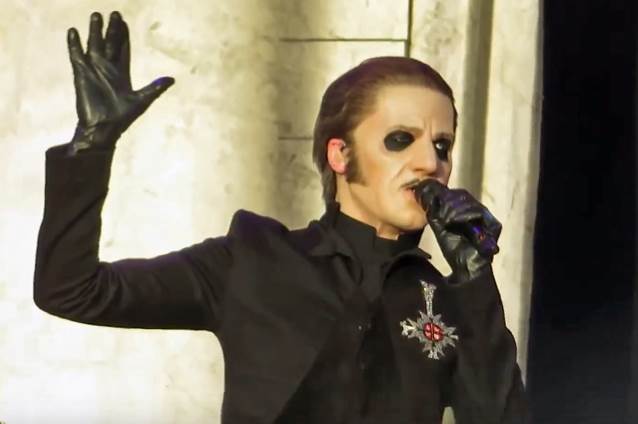 GHOST frontman Tobias Forge was interviewed by Eric Steele of 102.9 The Buzz radio station prior to the band's May 23 performance in Nashville, Tennessee. The full conversation can be streamed below. A few excerpts follow (as transcribed by BLABBERMOUTH.NET).

On the group's new album, "Prequelle":

Tobias: "I think there's a lot of elements on the record that all in all combined make it a very dramaturgically interesting record that you cannot really decipher just by hearing one song. 'Dance [Macabre]' sounds the way it does because [of] its placement in the record. I wrote that song [and] included that in the record because it was needed. If you do the cinematic comparison, we needed a car chase in the film, so we wrote that in. That's the only song that sounds like that. There's different scenes, different songs. That's how I like to write records — to have every song be a special little chapter and a special little color. In order to get the full gist of this [meal], you need to eat all ten [courses], ending with the dessert in the end, to get that full journey."

On whether he's actually the one shown dancing in the "Rats" music video:

Tobias: "Oh yeah. Of course. [Laughs] Well, no. I'm in there, though. If I could dance like that, I wouldn't be wasting my time in this rock nonsense. I'd have a real job like that guy."

On whether he has a bucket list of potential collaborators:

Tobias: "Not really. As a rock aficionado, you have a bucket list of people that you'd like to, I don't know, hang out with. I don't even know what that means anymore, because over the years, you've gotten somewhat personal with some of your heroes. That feels really strengthening and really cool, and some you've met who were just like, 'Wow, that was not really cool at all,' because you have one idea in your head and that might not match up with reality. The same thing goes with people when, as you grow bigger and more, I don't know, fruit-bearing from a commercial point of view, obviously your options in making records is a little bit broadened. At the end of the day, it's down to the will and availability and pricing, but definitely the smorgasbord has gotten bigger in terms of who to choose to ask. Over the years, I've definitely noticed that it's not always a given just because someone has done something in the past or is known for doing for this or that, that does not mean that you and that person will have a great, fruitful relationship or a good collaboration. Sometimes, the people that I've ended up collaborating with in some way or form have been completely out of nowhere. I think that the easiest way to explain it is to compare it to an actual sexual relationship. You might see someone on a picture and it feels fantastic, and once you meet, you're like, [groans] — 'That voice, I can't stand it.' The same thing goes with collaborations. I don't play around a lot with the idea of having a dream team working with my band. There's a lot of people that I like to hang out with, a lot of people that I would like to spend time with just because I find them uniquely inspiring or have been heroes of mine, but that doesn't mean automatically that I would like to be in a band with Jimmy Page. I love James Hetfield for being that guy in METALLICA, whereas if I start thinking about him being in another band, it's unthinkable. Dave Grohl proves that he can do a lot of different things, but that's a complete side note. Most people in most bands are really good at that [one thing]. I would suck as a hired hand. I'm good at what I do, and I could not be a vocalist in any band. I can sing in my band because I've directed the platform which I am singing within, but if I would jump in for Rob Halford, I would screw it up completely."

Tobias: "It ended up very organically just happening. Originally, the idea was for the whole project to be very much more like a theater or play — not really playing festivals, kind of like what we're doing right now, 'an evening with.' Yes, at the end of the day, we go up on stage and play rock and roll to entertain people, so by default, it's a rock and roll show, but I didn't want it to be part of any scene. I didn't want it to be regarded as something that would play in clubs. I wanted it to be more like a specialty, boutique-y act. I thought it was going to be release a record, and then we can go to New York and play three shows in a little theater, and three months later, we can go to L.A. and do a little residency there, and then we can play at an art festival in Austin — shit like that. It was not necessarily [going to be] a hard-touring band. That way, I figured it could regarded more like a rock version of Cirque du Soleil or something — a different thing, not necessarily part of the rock world. But gravity had its course, and 600 shows later, I think we're now finally closing a little bit on the things that I was talking about in the beginning."

On whether he'd ever considering "licensing" a second troupe that tours under the GHOST moniker, a la Cirque du Soleil:

Tobias: "I think it's part of the time right now when we have this regime shift. As the old bands are quitting or perishing, I think it was probably Gene Simmons that started talking about it first, being a businessman and all. He was sort of suggesting and hinting the idea of KISS surpassing him and Paul [Stanley] being in the band. As a KISS fan, and as KISS fan from a very early age, I would not prefer that. I'd like to see them now as well, because it's them, but I will always have the fond memories of the original thing. That is also unthinkable that it will exist forever, and I don't think it's up to me to pass judgment on how the future want to reenact rock history. When I'm 70 years old and if I have a grandkid who wants to go see the KISS show, great — that's fantastic. I can tell him or her about when I was three years old and started loving this band. It won't be Gene and Paul, but who am I to refuse the future of that, the same way I have never heard Bach play his own tracks? I don't think it's up to decide whomever is playing the DOKKEN songs 100 years from now. Someone has to [be] rockin' like DOKKEN. If we have any importance in the longer scheme of things, it's not up to me to decide how they want to digest GHOST."

On the group's religious imagery:

Tobias: "As a very imaginative kid and grown-up, I just have a natural sort of gravity towards history and religion and stories. The same way that I'm interested in 'Star Wars', I found The Bible compelling. My mom is and has always been very interested in art, so where she has never really been religious, she is extremely liberal, and there was no censorship at home in terms of culture. There was French films playing on TV with people sort of halfway screwing each other, and there was rock and roll music all the time. There was a lot of grown-up culture in my home. She always used to work in art, and she was always very keen on taking me to church — not for mass, but for art. She was interested in the artifacts. I think it's from spending a lot of time in cathedrals and churches. In my hometown where I grew up, there's a very old Catholic church. It has all that sort of lavish Catholic splender and that sort of flaunting. Every time I'm back in town, I try to go there, because it's an old church and has a lot of history in there. The walls are literally whispering to you. A lot of that was inspirational for what we do now."

Upon its release via Loma Vista Recordings earlier this month, "Prequelle" landed at position No. 3 on the Billboard 200 chart, shifting 66,000 equivalent album units during its first week of release. Of that sum, around 61,000 were in traditional album sales.

GHOST's first-week tally benefited from a concert ticket/album sale redemption offer in association with the band's spring U.S. theater tour, as well as a pair of arena dates later this year.