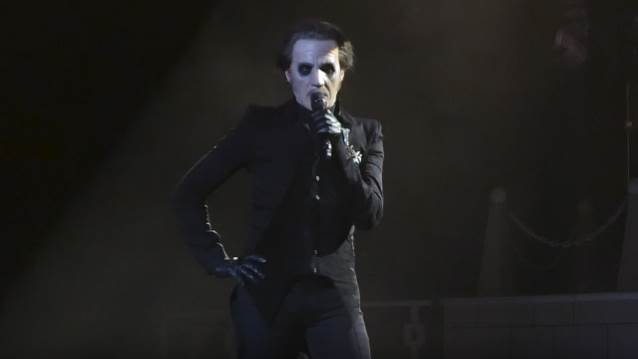 GHOST's TOBIAS FORGE Reflects On Recording 'Meliora': 'It Was Very Lavish And Stupid'

GHOST mastermind Tobias Forge recently spoke with Australia's Heavy magazine. The full conversation can be streamed below. A few excerpts follow (as transcribed by BLABBERMOUTH.NET).

On the group's new album, "Prequelle":

Tobias: "I always try to write a record that in some way or form differs a little bit from the previous one. I usually leave a record — the record-writing and recording process — with a little bit of a list of things that I want to do better next time. That is not to say that every record ends with me thinking it sucks, but you always have that little, 'Ahh, next time, we're going to do this; next time, we're going to do that; this did not work out that well, or this was good for this time, and next time I'm going to do that.' Usually I have two years sort of aiming at the next record, and compiling a big pile of musical ideas and stuff for the next one, which is basically what I'm doing right now, which is what I did between 2014-15 until I started getting 'Prequelle' together in 2016. I always try to write new songs. On one hand, you want to make an autonomous craft that has its own dramaturgy starting at zero and 45 minutes later, it is one comprehensible roller coaster similar to a film, where you have a beginning, a complication and then you have a resolve with some sort of message. Then you also want these songs, these scenes from the film, to play a good part in the live show, so it's important that you write songs that will feel good to play and will hopefully work well with the crowd. You have to work on two fronts — the record needs to be good, but it also needs to be bringing something to the table in terms of the show. I love making records; I think records are still very important; but my job, essentially, is to go around the world and play these songs, and recreate them with a band."

On what specifically he wanted to do differently when making "Prequelle":

Tobias: "There were a few technical things that we did with 'Meliora' that I think we experimented in a way... We experimented to results. Once we had done that experiment on one record, you know that you can do that a little bit quicker next time. Just overall, we streamlined down a lot of things. On 'Meliora', we did everything quite lavishly. Klas and I — Klas Åhlund, the producer of 'Meliora' — we spent three months making the record in terms of the pre-production, and then we went to L.A. and recorded the drums there with our session drummer, and then went back to Stockholm and we had a big studio there. We had an American engineer; we had a studio assistant; we had a guitar tech who was there 24-7; we had someone doing all the editing, and people coming in and out; and every day we had catering for 10 people, just because people were hanging out playing fucking video games or whatever. It was just a very, very lavish, stupid sort of procedure. On one hand, you think it's good for morale to do that, but no, it wasn't, evidently, in the end. This time around, I chose to work with Tom Dalgety. Tom Dalgety's a very good producer, but he has spent many, many years as an engineer as well, so he did not only produce — he also engineered the album. Most of the time, it was just me and Tom. If we needed the drums to be recorded, we had a session drummer come in and play the drums, and then he was off. If we needed someone to come in and play piano, we called someone in to play piano. It was a little bit more streamlined. If we needed the guitars to be fixed, we called someone who came in and got their guitars and fixed them and fucked off, rather than just having someone 24-7 standing by, which is nice and it feels very elevated doing that, but it also requires a lot of energy for people. It just felt very relaxed, because it was just me and Tom most of the time, which was very nice. It was very focused, and I think we both felt the urgency of this record as well. It was very important that it got extremely good."

On whether he felt any pressure when writing and recording "Prequelle":

Tobias: "Of course I did. I'm still in a sort of upwards trajectory with GHOST, and 'Meliora' definitely changed a lot, but 'Meliora' did not prove during that cycle, it didn't prove to be a peak and then it was sort of fading. It was still looking like the projection was sort of aiming higher, and that also led to a sense of urgency making the record – like, 'How do you stay on route to where we're going, which we don't know yet, without replicating 'Meliora' and not straying too far?' Of course there was a sense of urgency with the record. It's very much of a survival from an artistic point of view, from a personal point of view. There was a lot of things depending on it. And for every accolade you get — for every step you're taking in terms of being nominated for something, winning something such as a Grammy, getting to the number one spot on American rock radio, all these things – if you're making a new record, and your new record does not produce similar accolades, it will be regarded as a failure. You can choose to make your decisions based on that, and try to do everything in your power to control that, or you can completely ignore it. I just try to find some sort of middle ground where you acknowledge it but try not to be blinded by it. It's very hard to explain it, but yes, I felt pressure, but I was definitely not caving in because of that pressure. It was not an angst-filled recording. The recording was actually very nice. It was good — we felt that what we were doing was good."

On the album's themes:

Tobias: "To correlate with the actual process of making the record, this was definitely a record about survival, and survival through a tumultuous time of your existence basically being threatened. I already had the theme of the record planned out years ago, even before making 'Meliora', because I really wanted to make a record about the plague and the Black Death — not necessarily from a biological perspective. I think that's not really interesting; I let CARCASS do that, if you want to explain the medical sort of procedure of dying in a bubonic plague, but more from a sort of philosophical point of view. Half the population of Europe was annihilated, and obviously, this led to a tremendous trauma. But half of the population survived, and there was a lot of mortality issues after that that led to the whole memento mori, seize the day, don't forget that you are actually mortal, and that death can wipe us out very easily. There was a lot of epiphanies of that sort that came at least in the art. There's a lot of art that expresses that after the 1350s. I think that there is something to learn from catastrophe as well. To use a few very well-used clichés, but what doesn't kill you makes you stronger often. I think that is something that at least I am thinking about."

Tobias: "I haven't felt anonymous for many years. For me, it wasn't a big difference, actually. Over the years, as the representative of the group who went to all the meetings and did all the important interviews and everything, I really felt like I was given enough pats on my back, and since my days of underground death metal past, I definitely had a certain recognition factor when I was out touring, because there was a lot of fans that sort of had their radar in the underground that knew who I was anyway. I never really felt anonymous, and at the end of the day, it was sort of a technicality. Of course, the reasons and how some people chose to do it, for the reasons they did, that obviously is not very... that was alarming, of course."

"Prequelle" was released June 1 via Loma Vista Recordings. The disc is likely to land at No. 3 on this weekend's Billboard 200 album chart. It is expected to move between 49,000 and 54,000 equivalent album units in the week ending June 7. Between 46,000 and 51,000 of those are projected to be in traditional album sales. Final sales figures for the week will be published on Sunday night (June 10).