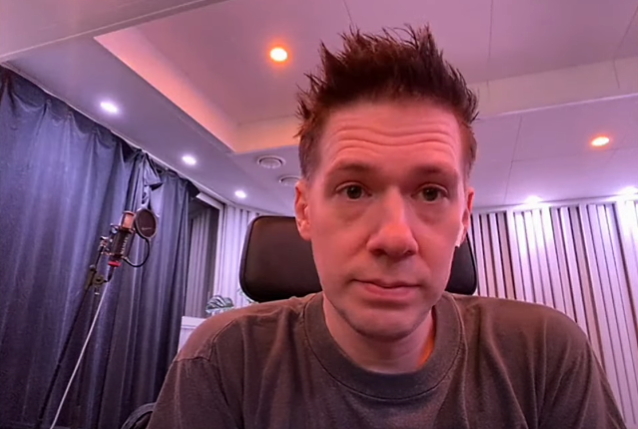 In a new interview with Meltdown of Detroit's WRIF radio station, GHOST mastermind Tobias Forge spoke about the importance of social media both as it relates to promoting his band and his personal need — or lack thereof — to stay connected to the outside world. He said (as transcribed by BLABBERMOUTH.NET): "As a person, I've never had a Facebook account other than what I had to have in order to go into our own Facebook at a certain point, but I gave that up a long, long time ago. I've never had Instagram, I've never had Twitter or anything. I already felt in 2008, when all that stuff sort of appeared, that that was not for me. So I just live a lifestyle that is a little bit more old school, if you will. But I also understand the meaning and the mechanisms that drive people to use that and why it's important and all that, and why it's important for us. So I do not criticize it from that standpoint. And Spotify, the same thing. Yeah, of course, I wish it was 1985 — that would be fucking phenomenal — but it's not. And specifically Spotify and similar services definitely drew the music business out of the dark ages it was [in] about 10, 12, 15 years ago, where there was nothing; it was just a big decline. And now at least it works. Spotify gave the investors, for lack of a nicer word — the record labels and music labels, whatever — they gave the labels an incentive to invest in bands again. And that is what was going out the door in 2007. They were leaving; they were not doing it anymore, because everything that they invested in was a loss. So I'm really happy about that, and I am happy about TikTok even though TikTok was something… I mean, I do have kids and I know that TikTok existed but TikTok is something that I learned in the last month what it was, basically. I quickly had to sort of, like, 'Just tell me what the fuck is going on. I don't get it. Okay. Okay. Cool.'"

Forge previously discussed his lack of interest in social media earlier this year in an interview with Metal Hammer magazine. At the time he said: "I don't go on social media unless there's something that someone is pointing at. 'Look at this thing!' 'Oh, crazy....' I'd say that over half the time, it's my wife showing me some artist who's done something cool. It's very little. I don't get my updates from social media. I had a feeling 15 years ago, around the time that Facebook arrived. I said, 'That is not good.' Of course, I didn't foresee all of the ways that it would destroy mankind and politically or all of those other things that it was going to be used for."

He continued: "I read a long time ago that our mind — our psyche — has a limited amount of space. You mind's RAM, basically. There's a limited amount of megabytes in your head and from what I read, you have space for roughly three thousand people in your head and you can have eight relationships. So there are eight chairs around your table and you're sitting at the head. Four and four. And you have three thousand people in your gallery. That worked perfectly fine in the old days because three thousand people was just about how many were in your village and eight people were probably your family; whereas now, the fucking Kardashians take up space in my head! Why? I don't give a fuck about them! Why do I know...I can't really tell who's who, but why do I fucking know this?"

Earlier this month, GHOST scored its first-ever Top 40 single in the U.K. with the 2019 song "Mary On A Cross" after a TikTok user used a slowed down version of the song to soundtrack a short video about the Netflix show "Stranger Things". Since then, the "Mary On The Cross" hashtag has amassed over one billion TikTok views and the song was used to soundtrack tens of thousands of videos on the platform. GHOST later released the official slowed down version of "Mary On A Cross" with added reverb.