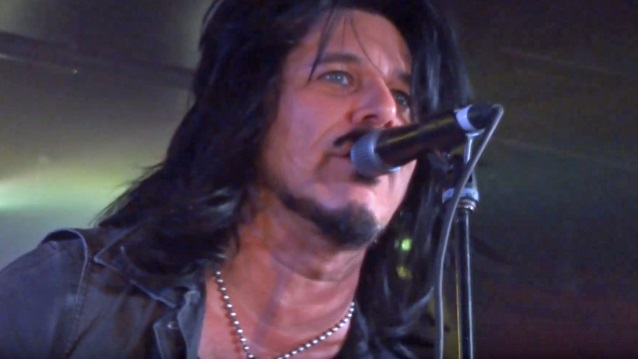 Former GUNS N' ROSES guitarist Gilby Clarke says that performing with the band's partially reunited lineup at the Rock And Roll Hall Of Fame induction was a "surreal" experience.

Clarke played with GUNS members Slash, Steven Adler, Matt Sorum and Duff McKagan at the band's Rock And Roll Hall Of Fame induction in April 2012, although he himself was not inducted as part of the group. McKagan, Slash, Adler, Sorum and Clarke, performed three "Appetite For Destruction" songs with Myles Kennedy at the event.

In a brand new interview with Australia's "Collision" radio show, Gilby stated about reconnecting with his former bandmates at the Rock Hall: "The Hall Of Fame induction was surreal, because I think it was a surprise to all of us. When it all was going down, it was kind of like a dark cloud, because no one was really looking forward to it. It was such an awkward situation, because Axl [Rose, vocals] had made it clear he wanted no part of it, Izzy made it clear he wanted no part of it. I know Slash and Duff really wanted to do something special, and that performance really didn't come together until, honestly, the day before. I got a call from Duff. He said, 'Hey, Gilby, we decided we're gonna play. We'd really love you to come up and play with us.' And I had no intention of going — we all had tickets and stuff — but being that the guys asked me to play, I [said] I would go and play with the guys."

Despite his initial reservations about performing with GN'R at the event, Clarke said that he "actually did have fun. I really enjoyed playing with Steven," he said. "That was really nice. Myles is a class act. He can just get up there and do his thing, and he's got great balls and he does a great job, and that was extremely impressive."

After exiting GUNS N' ROSES, Clarke continued as a producer and solo artist, while also playing in ROCK STAR SUPERNOVA, HEART and other acts.

"This year, I really haven't been doing many gigs; we've just done a few here and there," Gilby told "Collision". "But I've been working on a new record all year long. At the beginning of the year, I had a handful of songs that I thought were really good and I just spent the whole year tracking them. And it's done, it's getting mixed right now. And hopefully it's gonna be a first-quarter-of-next-year release. But it is done, and in my opinion, it's pretty damn good. I've tried to jump-start this record a few times over the last few years and I just didn't feel good about it until I got this batch of songs. And I'm really happy right now — I think it's a good rock and roll record."