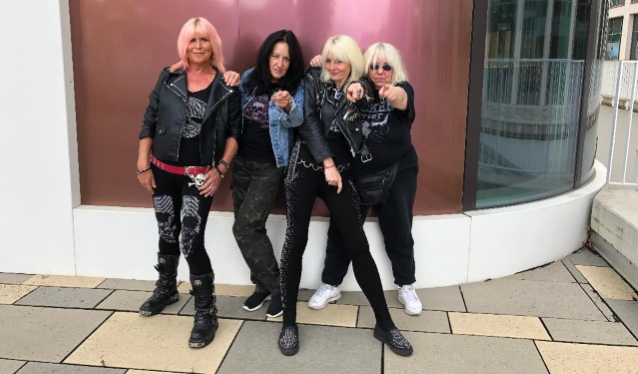 GIRLSCHOOL Members Recall Meeting MOTÖRHEAD's LEMMY The First Time: 'It Was Like Serendipity'

In an interview with TotalRock Radio's Dawn Osbourne prior to their January 30 show at London Underworld in London, England, United Kingdom, members of veteran all-girl British hard rockers GIRLSCHOOL recalled their first encounter with legendary MOTÖRHEAD frontman Ian "Lemmy" Kilmister. The two bands teamed up for the 1981 "St. Valentine's Day Massacre" EP that featured Kilmister joining GIRLSCHOOL on a cover of JOHNNY KIDD & THE PIRATES' "Please Don't Touch", while each band recorded one of each other's songs, with GIRLSCHOOL tackling MOTÖRHEAD's "Bomber" and MOTÖRHEAD recording GIRLSCHOOL's "Emergency".

"When we did our first single, 'Take It All The Way', Lemmy, actually, at the same time, was looking for a support band for their first major British tour, the 'Overkill' tour," said guitarist/vocalist Kim McAuliffe (see video below). "He heard about us and he heard our single, and he came down to see us at rehearsal, just to meet us. We clicked. I still remember the first time — MOTÖRHEAD wasn't really that well known at that point either. We've just seen photos of them and heard their [single], 'Motörhead', which, funny enough, somebody had given us the 'Motörhead' [single]. Me and Kelly [Johnson, guitar] go 'Bloody hell!' We listened to it and go 'What the hell!' Then a couple of months later, we heard that Lemmy wanted to meet us. It was like serendipity. It all fell into place."

GIRLSCHOOL also shared a story on how Johnson, who passed away in 2007 from a six-year battle with spinal cancer, posthumously appeared on the band's 2008 "Legacy" studio album. The band took an unconventional route and placed her ashes into the maracas heard on the album's lead-off track, "Everything's The Same".

"The story of it is, when she was ill, I was seated in the hospice," said guitarist Jackie Chambers. "I said, 'We got to get you on this album somehow.' I had written this song called 'From The Other Side', and she was going to come and sing the response. Kim would sing, 'I'll meet you from the other side,' and [Kelly would sing], 'I'll greet you from the other side,' because she knew she was going to die. It's kind of joking; she was playing with it. Anyway, she died before we did the album. She told me to share out her ashes between these little urns. We come up with the idea, a ghostly appearance by Kelly Johnson."

Added McAuliffe: "We're all in the pub one day: 'Wouldn't it be funny if we shook her ashes?' It started off as a bit of a joke, really."

Said Chambers, "We actually asked her mom and dad for permission. We knew that Kelly would have thought it was hilarious. We just stood in the studio doing this [shaking maracas]."

McAuliffe: "We said to [producer] Tim [Hamill] at the time, 'What is the weirdest thing you've ever recorded?' He said 'This has got to be it.'"

A year ago, GIRLSCHOOL parted ways with longtime bassist Enid Williams. She has since been replaced by Tracey Lamb (formerly of ROCK GODDESS),who previously played with GIRLSCHOOL from 1987 to 1991 and from 1993 to 2000.