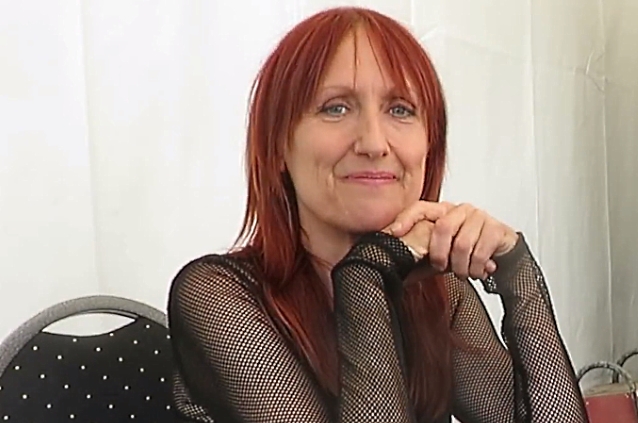 Tracey Lamb, formerly of ROCK GODDESS and GIRLSCHOOL (1987-1991 and 1993-2000),will help GIRLSCHOOL out on upcoming dates until a permanent replacement is secured.

Says the band: "GIRLSCHOOL would like to wish Enid all the best in all her future ventures.

"Thank you for standing by us all these years and we will see you at all the shows. We're also looking forward to recording new material soon."

A founding member of GIRLSCHOOL, Williams left the band in 1982, at the height of the group's success. She rejoined GIRLSCHOOL in 2000 after the departure of Kelly Johnson and Tracey Lamb, taking back her backing vocalist slot and introducing lyrics about social and political matters.

In a 2018 interview with YesterdazeNews, Williams spoke about how the music business has changed in the 40 years since GIRLSCHOOL was formed: "Everything changes, and you can't avoid that," she said. "And some things are better and some things aren't. So, for example, certainly 40 years ago, 30 years ago, maybe 20, you had to kind of move to London or New York or L.A. and you had to wait for an A&R guy — and it would be a guy, generally — to sign you up. And, to some extent, people were treated like kids in the '60s and '70s… But if you look at the bands that were coming through before, you'd have loads of bands but only a few would get signed up, and if somebody didn't get signed up after a few years, then maybe they'd go and get steady jobs or whatever, whereas now anybody can play music anywhere in the world. So you do get… For example, you've got a couple of Scandinavian singers breaking through and… it's more egalitarian; it's that DIY attitude going back to punk, to a certain degree, so that's a really great thing…. But some of it's become more corporate as well. Some of the bigger tours, it's much more run like a business. And sometimes one misses the sex, drugs and rock and roll kind of… Not that those things don't exist, but it's not quite the same."