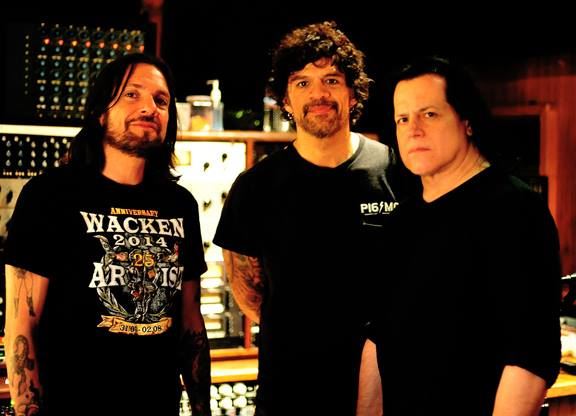 Glenn Danzig was in a Los Angeles-area recording studio on this week with guitarist Tommy Victor and drummer Joey Castillo laying down tracks for the upcoming DANZIG album, tentatively due in early 2017. Castillo also laid down some drums on an Elvis Presley track for the "Danzig Sings Elvis" record, which Glenn says is now finished and ready for release. Some of the songs Danzig has recorded include "Home Is Where the Heart Is" and the Faron Young-composed "Is It So Strange?"

"Elvis is actually kind of how I got into music," Danzig told Rolling Stone last year. "When I was a kid, I was cutting school pretending I was sick and I would lie at home watching old movies, and 'Jailhouse Rock' came on with Elvis. I was like, 'I want to do this. This is great.' And that's how I veered to music."

Regarding his approach on the "Danzig Sings Elvis" LP, Glenn said: "I'm stripping some of the stuff down to the bare bones, very old-school fifties echoey slap-back vocals."

DANZIG's last collection of original material, 2010's "Deth Red Sabaoth", sold 11,700 copies in the United States in its first week of release to land at position No. 35 on The Billboard 200 chart.