In a video interview promoting his just-released homage to Italian spaghetti westerns and classic vampire films, "Death Rider In The House Of Vampires", Glenn Danzig was asked if fans can expect to see a sequel at some point in the future. He responded: "That's something I've been asked already informally. But yes. Of course, if the movie is successful, there will be a sequel. For sure, [actress] Kim [Director; 'Blair Witch 2', 'The Deuce'] and I will come back, and that's all I can tell you. The others may or may not come back. If we do the sequel, you'll have to see it to see who doesn't come back and who comes back."

"Death Rider In The House Of Vampires" stars Devon Sawa as the Death Rider, Julian Sands as Count Holliday and Kim Director as Carmilla Joe. Joining them are Eli Roth as Drac Cassidy, Ashley Wisdom as Mina Belle, Victor DiMattia as Kid Vlad, Danny Trejo as Bela Latigo, and Danzig himself as the vampire gunslinger Bad Bathory.

Glenn told Rolling Stone about "Death Rider In The House Of Vampires": "It's an homage to classic vampire movies and, of course, classic Italian spaghetti Westerns. I just mixed the two genres. I didn't think anyone would have done it before. Basically [the character] Death Rider travels to the vampire sanctuary out in the middle of the desert, and then it all goes crazy after that."

Asked if he wrote the Bad Bathory character for himself, Danzig said: "I started writing the script, and I had all these characters. And then eventually I was, like, 'You know what? I could do this, and we won't have to look for somebody and we get out of it cheap.' So I didn't originally intend for me to be that character, but then I just started thinking about him, like, 'I'll just do this one. It's not a big part. It'd be easy. I could still do the directing.'

"With directing, at least for me, you're involved in everything. People come to you with wardrobe, sets, casting; pre-production is insane. The director's got the hardest job. I just want to make sure I'm, like, a real director and not like one of these Hollywood directors where somebody else will start the movie and then they take credit. [Laughs]."

"Death Rider In The House Of Vampires" opened across the U.S. at select theaters on Friday, August 27. 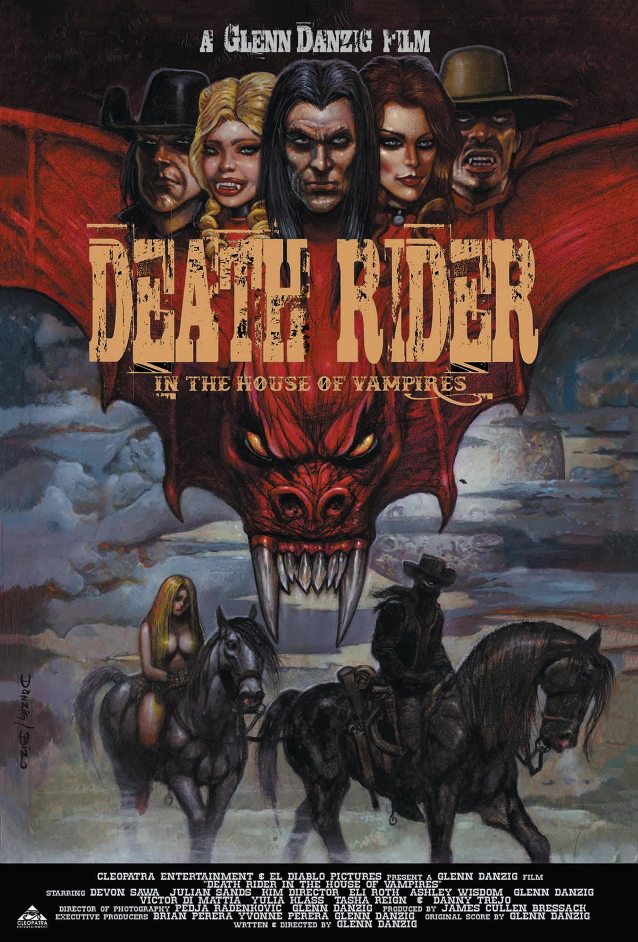