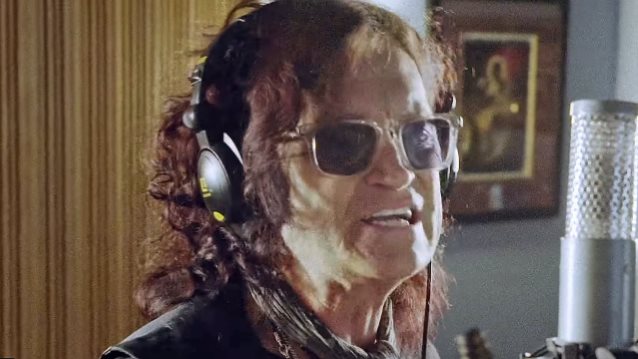 myRockworld recently conducted an interview with legendary bassist/vocalist Glenn Hughes (DEEP PURPLE, BLACK SABBATH, BLACK COUNTRY COMMUNION). You can now listen to the chat in the YouTube clip below.

Speaking about some of the lyrical themes covered on BLACK COUNTRY COMMUNION's long-awaited fourth album, "BCCIV", Hughes said: "All the songs were written with a topic — what kind of song we're gonna write musically, what kind of song am I gonna write lyrics about? This album is about walking through the fear, having faith, hope, the killing of dolphins, which I'm against, of course. Look for a big video on [that song, 'The Cove'] — a big video. 'Wanderlust', a song that was written about my travels and always returning home, always safe… to get back home to a safe place. 'The Crow', a very intense rock track written about the bird that watches over the band; it's really a great song about the Black Country. I wrote a song for my father when he passed away, called 'Love Remains'. The chorus was very, very sensitive, and it sounds like a song written for someone that had just passed. So it's a very personal song for me."

As for the track "The Last Song For My Resting Place", Hughes said: "[BLACK COUNTRY COMMUNION guitarist] Joe [Bonamassa said to] me, 'Hey, I've got this idea about writing a song about the head violin player… or the leader of the orchestra on the Titanic, and I said, 'That's a really good idea.' So he wrote a lyric about the violin player — a great Joe song that needed to be, as always… I mean, I love Joe, I love Joe's voice and I love Joe's work — I really do love him. And I thought it was a great opportunity to show how versatile Joe is on this particular song. So I'm really happy for Joe."

Elsewhere, the basic idea for "Over My Head" came to Hughes in the middle of the night. "[My wife] hears me singing, [singing] 'Over my head.' And she said, 'Honey, what's that?' I said, 'I don't know, but I have to go and record it,'" Glenn recalled. "And I left the bedroom and I went, [singing], 'Over my head,' and I just wrote a song around that chorus, that very melodic chorus. And I came back to bed, and the idea was recorded. And that's the way I took it to Joe and we finished it together."

"BCCIV" will be released on September 22 via Mascot Records. This is BLACK COUNTRY COMMUNION's first studio album since 2013's "Afterglow".

Just like its three predecessors, "BCCIV" was overseen by Kevin Shirley, whose catalogue of hit records for LED ZEPPELIN, IRON MAIDEN, AEROSMITH, JOURNEY and THE BLACK CROWES has made him one of the hottest producers that rock music has to offer. Shirley, who originally had the idea of putting Hughes and Bonamassa in a band after seeing them jamming together onstage in Los Angeles back in November 2009, is the group's unofficial "fifth member."

BLACK COUNTRY COMMUNION's inception took place when Hughes and Bonamassa fused their styles on stage in Los Angeles in November 2009 for an explosive performance at Guitar Center's King Of The Blues event. With the help and guidance of Shirley, they further added to their rock lineage by recruiting Bonham and Sherinian.