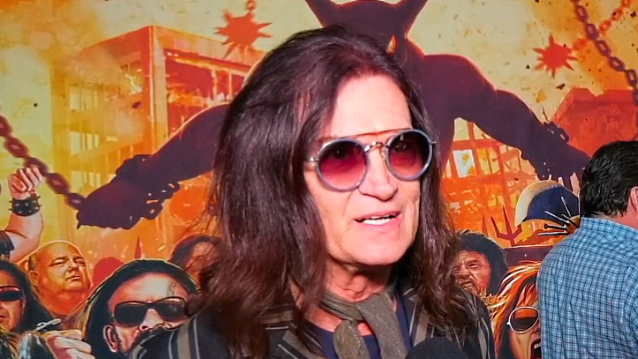 Legendary vocalist/bassist Glenn Hughes was interviewed by "The Blairing Out With Eric Blair Show" on the red carpet of the Ronnie James Dio 10th Memorial Awards Gala, which was held this past Thursday, February 20 at the Avalon in Los Angeles.

"Anything to do with Ronnie, to honor the legacy of my longest friend in the music business," Glenn said of his presence at the event (see video below). "I'm glad to be here in town this evening to be of service to a dear, dear friend, who happened to be an amazing singer, who happened to be a great human being."

Asked what is important to him about the Ronnie James Dio Stand Up And Shout Cancer Fund, Hughes said: "For me, it's important to educate people to get in early for check-ups, to get in and do the appropriate thing, to go to have check-ups and get checked. Because we have to do this. So many people, unfortunately, don't do this. My main concern, my priority is educating people to get in. Don't be frightened. We wanna live and we wanna honor the legacy of our own lives. Ronnie would want this, by the way — trust me."

The Ronnie James Dio Stand Up And Shout Cancer Fund has given much of its money to the T.J. Martell Foundation, which is focused on leukemia, cancer and AIDS. The fund also has supported the Nashville Vanderbilt-Ingram Research Center for Cancer for men's cancers, such as stomach, colon and prostate cancer, and the M.D. Anderson Cancer Center in Houston, where Dio was treated. Its fundraising efforts have included gala dinners and a tribute album containing songs written by Ronnie James Dio that were recorded and donated by major rock and metal recording artists called "This Is Your Life". The "This Is Your Life" album resulted in a 2015 Grammy win for "Best Metal Performance" for TENACIOUS D (actor/musicians Jack Black and Kyle Gass) and their rendition of Ronnie James Dio's "The Last in Line" from the tribute album.