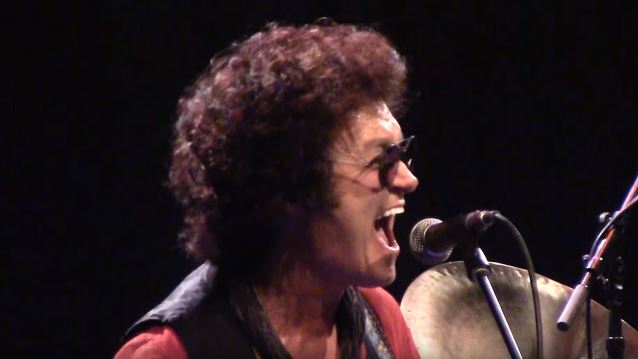 Glenn Hughes claims that he turned down an opportunity to join Ritchie Blackmore for live appearances where the guitarist revisited his past with RAINBOW and DEEP PURPLE.

Prior to the three shows Blackmore played earlier this summer with an all-new version of RAINBOW, the legendary axeman hadn't performed an exclusively hard rock concert under the RAINBOW moniker since May 1997. Since that time, the guitarist had focused his efforts on composing and performing renaissance and baroque-inspired music with his wife, Candice Night, in their band BLACKMORE'S NIGHT.

Asked for his opinion on the new RAINBOW, Hughes told HardrockHaven.net: "[Ritchie] asked me to do it with him. And I said no because he wanted to, funny enough, he wanted to use an unknown singer and I said, 'It's not me. It's not me to do that.' I've done that with David [Coverdale, former DEEP PURPLE and current WHITESNAKE singer] and it was good. I don't want to do it again. It was something… I said, I very eloquently said, 'No, thank you. I really would like to see you, but I can't do this at the point where I am right now.'"

Hughes also commented on WHITESNAKE's 2015 release "The Purple Album", which was billed as "a re-imagination of classic songs from David Coverdale's time as the lead singer for DEEP PURPLE's Mark III and Mark IV studio albums."

Glenn said: "Jimmy Page told me 18 months ago, 'Have you heard this? David's album on the PURPLE.' I said, 'Excuse me?' Page is telling me and I'm going, 'Thanks for telling me.' [Laughs] I didn't know about it. So I didn't know about it until it was announced, and then David sent me a copy and wanted my opinion. I got back to him, and blah, blah, blah, blah. And then I guested with him onstage last year in Beverly Hills and it was great.

"David and I, for all intents and purposes… I'm really good friends with David. I mean, really, like as close as you can get, but he didn't want to tell me about 'The Purple Album' for some reason. I never asked him. I wasn't upset at all. I absolutely wasn't. He just put his own spin on it. He just put his own spin on those songs and I gave him my two cents' worth. I said, 'Great, I think you did a good job on changing the stuff up a little bit.' You know?"

He continued: "I think the reason he did it is because we were going to get together with Jon Lord to do a Mach III and, when Jon died, David figured out to get Ritchie in would be impossible and then Ian Paice is with… so I think he just went off on his own and did his own tribute. And I never had a problem with it. People think I did, but I never had a problem with whatever David does…

"I was informed by Jimmy, but I was a little bit surprised, you know? I was quite surprised that I wasn't asked to do something with him on it, because it would have been great, I think, for fans, but I think he wanted to put his own spin on it which I also understand. Like I said, David and I are as close as you can get."

Hughes, who was inducted into the Rock And Roll Hall Of Fame earlier this year along with Blackmore, Coverdale, Lord, Rod Evans, Ian Gillan, Roger Glover and Ian Paice, has just completed work on a new solo album for an early November release.