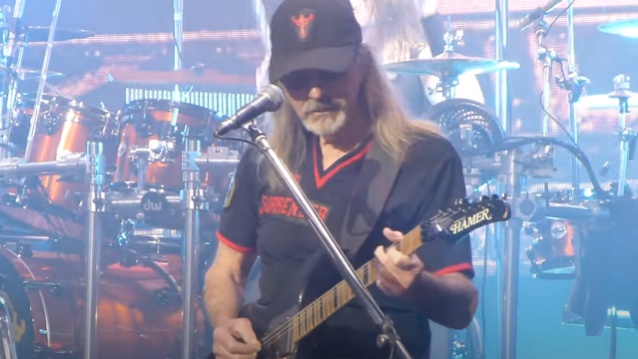 GLENN TIPTON: Next JUDAS PRIEST Album 'Will Be What Every Fan Will Want'

In a new interview with Ultimate Classic Rock, JUDAS PRIEST guitarist Glenn Tipton spoke about the progress of the songwriting sessions for the band's follow-up to 2018's "Firepower" album. He said: "The epidemic really halted the writing process. But the band was kicking ideas around before that. I think it's what every PRIEST fan would want to hear. There's no attempt to be clever or try and do something too risky. It's just down and out PRIEST. And as I say, I think it will be what every PRIEST fan will want."

Last month, JUDAS PRIEST singer Rob Halford was asked by Remy Maxwell of Audacy Check In if he agreed with guitarist Richie Faulkner's recent comment that the band's upcoming album will be more musically "progressive" than "Firepower". He responded: "Yeah, the metal is there. But here's the thing: we've tried our best not to replicate anything that we've done. From 'Rocka Rolla' all the way through to 'Firepower', each record has had a distinctive character. And it's tough because fans go, 'We want another 'Painkiller',' 'We want another 'British Steel'.' And [it's, like], 'Dude, we've already done that.'

In February, Faulkner told Canada's The Metal Voice about the progress of the songwriting sessions for PRIEST's next album: "Since the 'Firepower' tour, we all went our separate ways, like we do, and we've always got ideas coming up; me, Rob and Glenn, we sort of start to put ideas down. And we got together in early 2020 — me, Rob and Glenn; and [co-producer and touring guitarist] Andy Sneap was there as well — and we pooled all our ideas together and we started the first writing session. So we got together a batch of songs that were by no means finished, but they were developed enough that we could call them songs. So we could give them working titles. They were demos, if that makes sense. So we had a batch of demos. And then since then, we've been trying to find an opportunity where we can all get together and develop 'em further and record them. But, obviously, with the restrictions of the lockdown and the pandemic…"