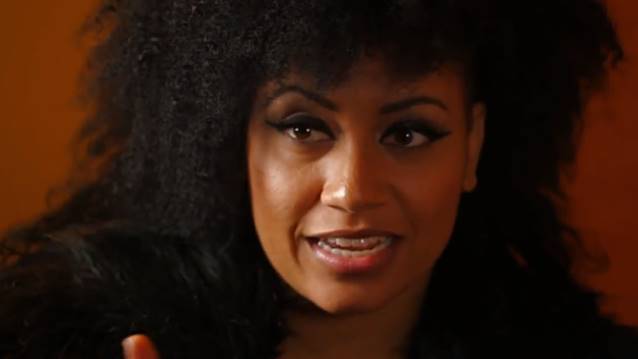 Laina Dawes, author of the book "What Are You Doing Here?: A Black Woman's Life And Liberation In Heavy Metal" (Bazillion Points),appeared Saturday, January 18, on the award-winning newsmagazine program "16x9" airing on Global Television — Canada's second most-watched broadcast television network. The episode, titled "Black Metal", covered women of color in the metal scene and also stars "What Are You Doing Here?" interviewee Militia of New York's all-female JUDAS PRIEST tribute act JUDAS PRIESTESS. Topics include suffering through harassment at metal shows for being a black woman; tackling ones childhood memories through writing; heavy metal as a life-saver.

"I went to cover METALLICA at [the Air Canada Centre] in 2009 and that was just totally insane," Laina said. "I had guys making gorilla noises at me when I walked by. I had a couple people call me the 'N' word."

Laina has loved metal since she was a girl, growing up with her white adopted family in Kingston, Ontario, Canada in the 1970s.

"I realized I was different from the time I was five," she said. "The realization that you are only, the only black person, or only one of a few black people, you always feel like an outsider. So I always felt like I didn’t really belong there. … It was tough and I felt like I didn’t have anyone to talk to."

Laina got into the aggressive sounds of rock bands like KISS and, later, the likes of JUDAS PRIEST. The music provided a release from her feelings of alienation.

"I've been quite honest about, if it wasn't for metal I would have killed myself … because you need that outlet for your anger," she said

Militia told "16x9" that she has been offered record contracts by big labels, but those offers always came with conditions attached.

"You should be in heels, always," she said. "Try to do the Tina [Turner] thing, she always wore wigs. So you should probably get a straight wig to cover … because if it's too wild, if it's too ethnic … people will turn away. And is it unfortunate? Yeah. Does it cost me work? Jobs? Experiences? Opportunities? Absolutely."

Featuring a foreword by Skin of SKUNK ANANSIE, Dawes's debut, "What Are You Doing Here?: A Black Woman's Life And Liberation In Heavy Metal", is available now wherever books are sold, and in eBook form via the Amazon Kindle, Barnes & Noble Nook, Apple iTunes Books, and Kobo platforms.

"'What Are You Doing Here' is a title that has always been with me since I started working on the book," Laina said. "I always knew the book was going to be called that because obviously it's the question that, you know, everyone gets asked the most is, 'What are we doing here?'"

The full segment is available for viewing below.