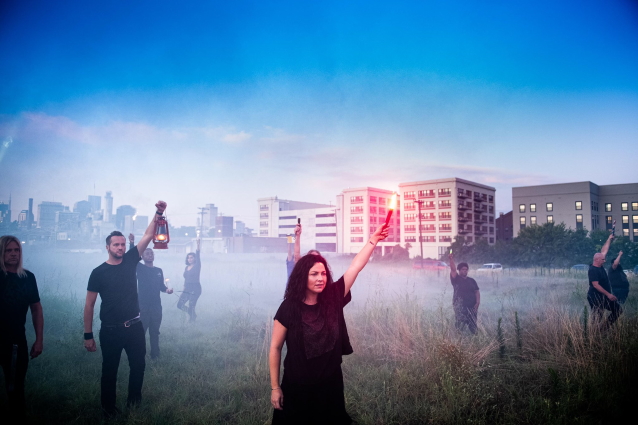 Go Behind The Scenes Of EVANESCENCE's New Music Video, 'Use My Voice'

Behind-the-scenes footage from the making of the music video for EVANESCENCE's latest single, "Use My Voice", can be seen below. The visuals follow frontwoman Amy Lee, her bandmates, and a diverse group of citizens as they unite for change and justice. The clip was directed by acclaimed filmmaker Eric Howell. Lee first met Howell back in 2015 when she was asked to write the end title theme for his film "Voice From The Stone", starring Emilia Clarke ("Game Of Thrones").

Beginning with Amy alone in the dark and ending in a collective light-filled demonstration as the day breaks, the video serves as a hopeful metaphor of moving from darkness into a more illuminated future by being heard.

Last month, EVANESCENCE partnered with HeadCount, one of the leading non-partisan, non-profit voter information services in the U.S. to help people navigate the registration and voting process by providing information on options to vote safely during the COVID-19 pandemic.

"We are proud to stand up and join the fight against the injustice, lies and oppression that plague our country and the world," Amy said. 'No matter who you are, what you look like, where you come from, or who you love, your voice matters. We hope to shine a light in the darkness, to empower and inpire. Use your voice. Vote."

"Use My Voice" follows "Wasted On You" and "The Game Is Over" as the third track to be released from "The Bitter Truth", EVANESCENCE's forthcoming new album, and their first containing all-new material in nearly a decade.

When asked in an interview with U.K.'s Rock Sound if it was still accurate to describe the new EVANESCENCE material as "dark" and "heavy," as she did last year during the early stages of the songwriting process, Lee said: "It's hard to sum up. I don't think you can sum it up just by saying that. In our first sessions that we did when we were writing together, definitely we were focusing mostly on just raw and heavy, because we'd just come off of 'Synthesis' and we were just dying to kind of document our sound as a group — which is cool, and we needed it, and it is a part of this album for sure. But it's gonna be more of a full palette than just that.

"It's been a really long time since we've put out a full new album, so it's important that we kind of do it all and use all of the parts that make up our sound, if that makes sense," she continued.

"We are still writing, and it's not all down, so it's hard to sum it up… but one of the things that we've been kind of aiming towards is taking the elements of what maybe are things that make up our sound and try to separate them and give each of them their own space. So some of the songs don't have strings and are fully rocking and heavy. And then some of the songs might be really in the electronic zone, and something might be more on the orchestral side. But overall, definitely coming off of what we just came off of, it's gonna be a rock record."

On the topic of "The Bitter Truth" album title, Amy said: "As the lyrics had started to form, and just my feeling in this moment in general, there's a big theme of disillusionment for me. Just growing up and seeing that fairy tales aren't really real. And it's hard to be a grownup — it really is. Because somebody else isn't in charge, we really have to be able to make our own decisions, find out our own information, protect ourselves. People die — we're all going to. There's no magic castle. So that sounds like a lot of doom and gloom when I say it, but there's a choice to accept that truth and live in it and embrace it and choose to live and choose to live in a moment, and the choice to just give up. And there's a struggle there, but my choice is most definitely to take that pill."