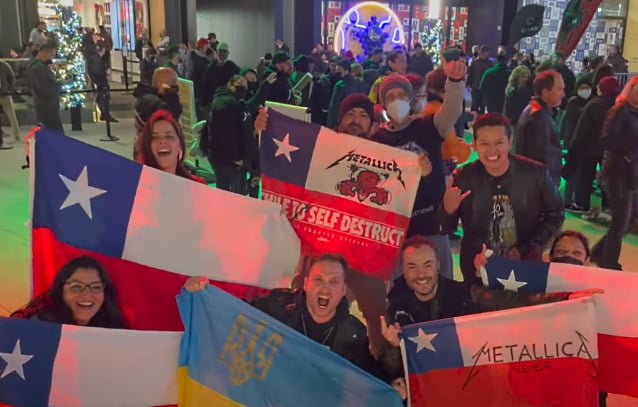 Go Behind The Scenes Of METALLICA's 'San Francisco Takeover' (Video)

Last week, Metal Pilgrim traveled from Kyiv, Ukraine to San Francisco, California for METALLICA's 40th-anniversary concerts and to experience the METALLICA "San Francisco Takeover." His 19-minute video report can be seen below.

Says Metal Pilgrim: "The best part? Meeting so many like-minded people at the many events @Metallica organised during the Takeover, including the volunteer opportunities with All Within My Hands Foundation @AllWithinMyHandsFoundation and many parties and activities planned.

"This video does not cover the METALLICA concerts as much as the events around it, yet a special episode on the concerts will be released in the future."

Featured in the video:

METALLICA's two 40th-anniversary shows, which were held in at San Francisco's Chase Center on December 17 and December 19, featured different setlists. They were part of the aforementioned "San Francisco Takeover", a four-day citywide celebration of the band's 40th anniversary that also included a film festival, photo exhibit and curated lineup of smaller venue shows featuring other acts.