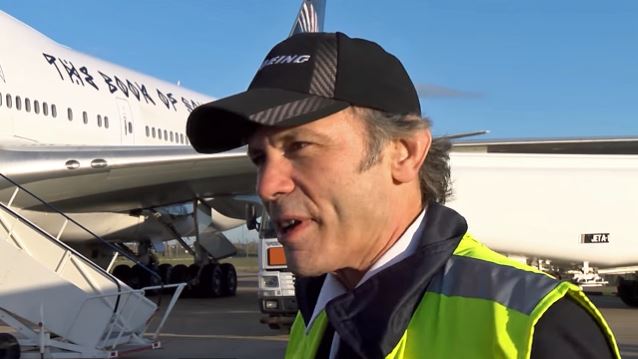 On February 17, hundreds of rock fans turned up at the airport in Cardiff, Wales, United Kingdom to catch see IRON MAIDEN's new-and-improved branded private tour plane. A four-minute report from Made In Cardiff TV can be seen below.

Dickinson addressed reporters on the tarmac of the Ft. Lauderdale-Hollywood International Airport shortly after landing the airplane on Friday, February 19. He explained MAIDEN's decision to upgrade to a 747: "The [757] is just not big enough for what we've got in mind in terms of a show. So what we've got on board at the moment is the stage show."

He continued: "I've actually been in Miami rehearsing for about two and a half weeks before this flight. So I actually flew back from Miami to pick up the airplane. And because it had been longer than a certain period, I had to jump back in the sim, do some landings and then fly the airplane over. So we pick up the rest of our equipment… In fact, we'll be spending tomorrow, basically, putting all the gear together and making sure it fits. Everything we need will be on the airplane, and all the technicians and baggage and everything else. We're going all around the world. I mean, we're doing some… I mean, [from] Perth, Australia to Cape Town [to] Shanghai to New Zealand. We're really going 'round the planet."

IRON MAIDEN's world tour, in support of the band's latest album, "The Book Of Souls", will kick off on February 24 in Florida.

Support on the trek will come from THE RAVEN AGE, the band led by IRON MAIDEN bassist Steve Harris's son George Harris.