Chavez Crime Family Productions and San Antonio cult TV show "Robb's MetalWorks" will host a press conference/listening party for GOD FORBID's new album, "Earthsblood", on February 15, 2009 at Cabo Grill in San Antonio, Texas. This free event will be attended by the band's guitarists Doc and Dallas Coyle and will be open to the public. Members of the media wishing to attend the event must be confirmed in advance as special passes will be needed to participate in the question-and-answer session with the band.

If you would like to attend the event (regardless of which part of Texas you live in),send a message to the "Robb's Metalworks"MySpace page.

GOD FORBID has made a new song, "War Of Attrition", available for free download at this location (free sign-up required). The web site features a live chat room where members of GOD FORBID will take turns chatting with fans as they listen and download the the track. The new web site is a social networking web site where fans can join, create their own profiles, network with other fans and members of GOD FORBID. Other features on the site include forum, chat room, groups, live webcam, and more. The track is off the band's record newest release, 'Earthsblood', due out on Century Media Records on February 24 in the U.S. and February 16 in Europe."

Regarding the album's title, guitarist Doc Coyle previously stated, "The title 'Earthsblood' came to me after watching the film 'There Will Be Blood'. What is the price of ambition? Is the blood of our bodies and the blood of the earth one and the same? With the current energy crisis, and its relation to many of the military conflicts worldwide, there has been a global, collective consciousness that has emerged in regards to the interdependence between humankind and the planet in which we inhabit. Coincidentally, the lyrics that Byron Davis and Dallas Coyle had written meshed with these revelations perfectly. This isn't a preachy, trendy, 'hip-to-be-green' album, nor is it a concept album. It's just an abstract observation." 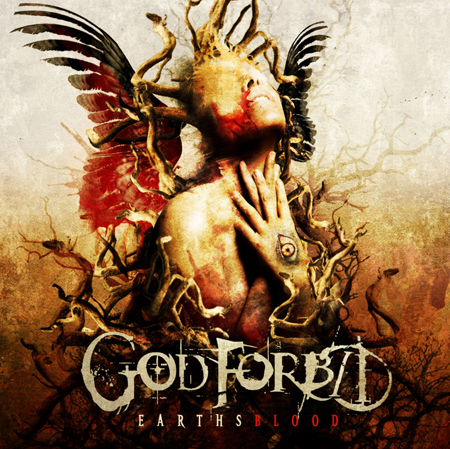