New Jersey metal titans GOD FORBID have issued the following update regarding their recently released DVD, "Beneath the Scars of Glory and Progression" (Century Media):

"It has come to our attention that some of you have had problems with our DVD. We asked Century Media to look into it, they checked with their manufacturer as well as the Dave Brodsky, the producer, and no one can find anything wrong with it. In fact the band, label and Dave all tested the DVD on various players before it went to the manufacturer and had no problems. The manufacturer said they ran similar tests and nothing is coming up saying there is a problem. So we are all just as perplexed as you are.

"Century Media has asked that anyone with problems mail their DVD back to them (it can just be the discs) and they will replace them with what we all hope are functional discs (they'll check 'em) as well as some schwag to make up for the hassle.

"We're really sorry for those who have had trouble and sorry it's taken a while to come up with a solution."

Here's the address to send in the DVDs:

GOD FORBID recently released a performance clip of the song "End of the World", taken from the "Beneath the Scars of Glory and Progression" DVD. Watch the footage below.

"Beneath the Scars of Glory and Progression" features a sold-out performance shot with multi camera angles at the Starland Ballroom in Ayreville, New Jersey, all of their promotional videos and an hour-long documentary composed of historical insight, introspection into each member's personalities, and some hysterical social commentary.

Doc Coyle (guitars, vocals) previously said about "Beneath the Scars of Glory and Progression", "The DVD turned out phenomenal. I've already mentioned how incredible the concert portion looks and sounds, but the documentary portion, directed by Denise Korycki, really shows what we are all about. It is a combination of historical insight, introspection into our personalities, social commentary and some god damn, funny-ass shit. I guess we were sick of being funny on other bands' DVDs. If you consider yourself a true GOD FORBID fan, this DVD will be essential. I think this DVD ranks among the best metal DVDs on the market." 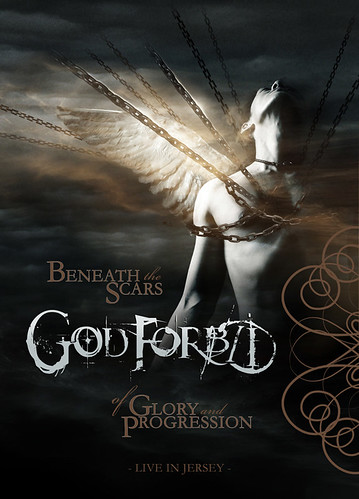