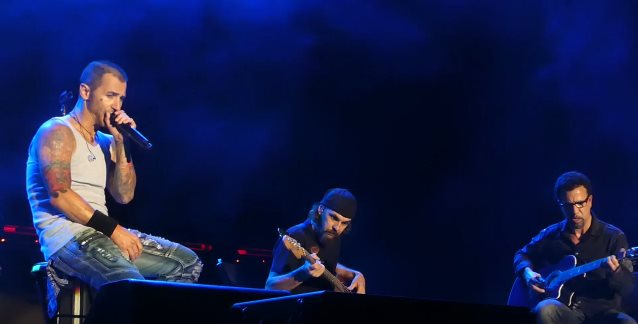 GODSMACK paid tribute to Chester Bennington and Chris Cornell last night (Wednesday, August 9) during the band's appearance at Musikfest in Bethlehem, Pennsylvana by performing cover versions of songs originally written and recorded by the LINKIN PARK and SOUNDGARDEN singers, both of whom died by suicide within months of each other.

GODSMACK frontman Sully Erna told WFMZ-TV earlier in the day that the band decided to acknowledge the pasing of the two rockers because "we feel like it's kind of like our obligation to honor those guys that have left us with really beautiful music and left us a little bit too soon."

Prior to launching into stripped-down covers of LINKIN PARK's "Crawling" and TEMPLE OF THE DOG's "Hunger Strike", Erna told the crowd: "I just wanna bring up something here quick. I don't wanna harp on this too long, 'cause I want you guys to leave here in a really good mood with a good positive feeling, man. But, as you know, this last couple of years, it's been pretty tragic with all the artists that we've lost. It's been actually mind-blowing to me how many amazing performers, amazing voices we've lost to some really sad, tragic situations, and some of them were very close friends of ours.