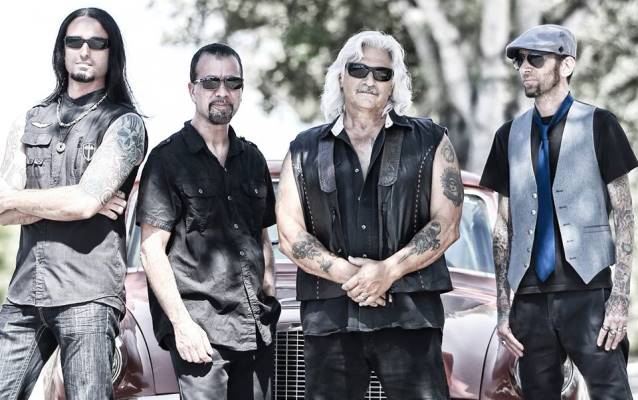 BLUE CROSS BAND formed the group with frontman Ray Cerbone and bassist Brian Carpenter. Larkin told News-Press.com, "I see myself doing the BLUE CROSS BAND after GODSMACK. This is a style of music I can see myself playing well into my 60s."

Larkin added that his style of playing in the new band will enable him to extend his career, explaining, "When I hit the drums in GODSMACK, I'm trying to kill 'em. In THE CROSS, I shut my eyes and I'm into the lyrics and the song and Tony's guitar playing and Brian's bass. It's a band thing, whereas in GODSMACK, it's like a gang thing. We're out to pummel."

Rombola said about the project, "I've spent my life playing different styles . . . (with the BLUE CROSS BAND),I get to play all the stuff I've learned with the blues and apply it to these songs. It's a lot of fun."

BLUE CROSS BAND made its live debut in June, with plans to record and release an album after the current GODSMACK album and touring cycle is over.

Although the GODSMACK offshoot ANOTHER ANIMAL did not sit well with frontman Sully Erna when his bandmates launched that project a few years ago, Erna told The Pulse Of Radio that the members of GODSMACK are in a much better place with each other these days. "You know, I think we're finally to that place now where everybody just has so much respect for each other and we've gotten over the really tough moments and really understand our place as a band now, not only with the fans and in this industry, but amongst each other — you know, getting through all those tough spots and coming back to a place where we really have regained our brotherhood and we're getting along better now than ever, " he said.

GODSMACK's new album, "1000hp" (One Thousand Horsepower),was released on August 5 via Republic Records. The band's sixth studio effort will follow up 2010's "The Oracle" and follows a two-year hiatus.

GODSMACK will lead the lineup of the fifth annual Rockstar Energy Uproar Festival, which kicks off on August 15 in Clarkston, Michigan. Also on the bill are SEETHER, SKILLET, BUCKCHERRY, POP EVIL, ESCAPE THE FATE, REDLIGHT KING and others.