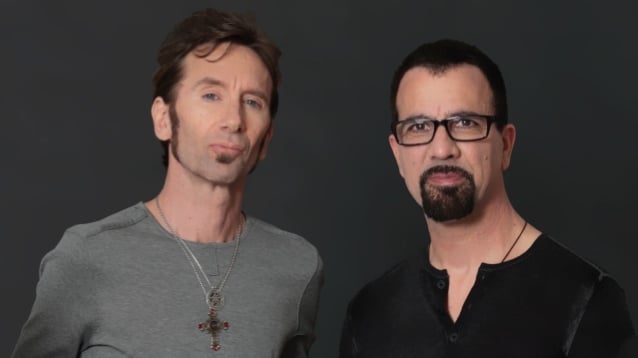 GODSMACK's Shannon Larkin spoke to The Sound Lab about the recent breakup of his THE APOCALYPSE BLUES REVUE side project, also featuring GODSMACK's Tony Rombola, alongside Brian Carpenter on bass and Ray "Rafer John" Cerbone on vocals.

"We lost our singer recently, so we got a new singer," Shannon said (see video below). "Our old singer was an old guy; our new singer is a younger guy, around our age… Our [old] singer turned 70… We get in a van. We don't have these fancy tour buses. And we play clubs — blues clubs — in America, smoke-filled blues bars, with no roadies — one roadie. And our singer, a 70-year-old guy, couldn't do it. So we got a new singer. And now the REVUE wouldn't be the REVUE without our old singer, so we changed the name to REVIVAL. So it's THE APOCALYPSE BLUES REVIVAL — coming soon."

According to Larkin, THE APOCALYPSE BLUES REVIVAL recorded its first song during a recent three-day break from GODSMACK's touring activities, with plans to release it within the next week.

"It's the heaviest blues band in the world," Shannon said. "But it's blues. And it's heavy. And it's psychedelic."

THE APOCALYPSE BLUES REVUE released its second album, "The Shape Of Blues To Come", in July 2018 via Provogue/Mascot Label Group.

The news of THE APOCALYPSE BLUES REVUE's dissolution was broken by Cerbone, who blamed the group's breakup on scheduling conflicts.

It’s coming soon people. The Apocalypse Blues Revival has begun. Stay tuned for announcement of new singer as well as a...

Posted by The Apocalypse Blues Revival on Monday, July 1, 2019