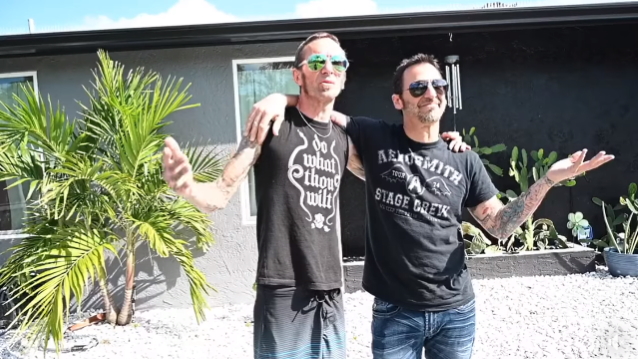 Sully Erna had a special Christmas gift for his bandmate Shannon Larkin this year: a car. The GODSMACK frontman posted a video on Facebook showing the drummer receiving his new vehicle and nearly breaking down in tears.

At the beginning of the five-minute clip, Erna tells the viewer: "We are in North Fort Myers, Florida about to do something really cool for my boy, my drummer, Shannon Larkin, who I've known since pretty much 1987, way back in the day when Shannon was with WRATHCHILD. About four years ago, he also decided to give up drinking and went sober. And I wanted to do something really cool for him this year for a Christmas present, but more or less just because he's one of my best friends and I love him dearly and he's just such a sweetheart of a guy.

"A while back, he had a 1964 Chevy Impala, and he had to give it up due to some financial problems he was going through. So this year, I purchased him a 1964 Chevy Impala. And even more importantly, I brought the love of his life, his daughter, and his best friend since they were baby childhood kiddies. This is gonna put everything over the top. So, we're about to just kind of go over the setup of this thing, and then we're gonna drive it up and kind of execute 'Operation My 64'."

In a 2017 interview with Cryptic Rock, Larkin about his personal friendship with Erna, whom he originally crossed paths with nearly two decades before he joined GODSMACK.

"I knew [Sully] twenty years, I met him in 1985. My band WRATHCHILD was doing the club circuit on the East Coast. Sully was a drummer and he was playing in a band… He had moved from Boston down to North Carolina to join this band — LEXX LUTHOR they were called. [Laughs] They ended up opening for WRATHCHILD one night in Carolina, and I met him for the first time. He ended up coming back to my hotel room and partying all night, [with] chicks and all that. We realized, wow, a couple of our tattoos were the same, we were both drummers; we clicked immediately. Through almost twenty years before GODSMACK, we remained friends; buddies that'd call each other up, 'Hey, I'm comin' to Boston,' or, 'I'm comin' to Carolina,' whatever. Over the years, it turned out that when he was still living in Carolina, this band on Epic Records called me — they were called MELIAH RAGE, they were from Boston. They called me looking for a drummer and I said, 'Hey, man, I know this guy Sully that's playing in a cover band. He's from Boston and he's a fucking badass drummer.' Turns out he gets the gig, moves back to Boston to join this band on a major label. So I kind of hooked him up way back in the day in his career. Of course, the band didn't make it or whatever, and he went on to play for several other bands before he dropped the drumsticks.

"My point is that we correlated on so many things on personal levels too: we're like brothers from another mother," he continued. "People say that, but for Sully and I it's something that's real. We've always noticed that in small things. Like he'd get a certain drum or whatever and call me and be like, 'Man, I just got this new snare drum.' I'm, like, 'Oh my god, I just got that last week,' or whatever. Tattoos or whatever. 'Yeah, I got this tattoo,' and I'd be like, 'Oh my god, I just got that,' you know? It's just crazy circumstances that… I believe in magic, dude. I believe in karma and I believe in destiny. I think Sully and I were meant to be in a band together; from the first day I met him, I believed that. All these years later, he gave me my dream, man. I'm forever grateful and I love him to this day."

GODSMACK is continuing to tour in support of its latest album, "When Legends Rise", which was released in April 2018. The disc followed up 2014's "1000hp" and was GODSMACK's first release through BMG after splitting with its longtime home, Republic/Universal.