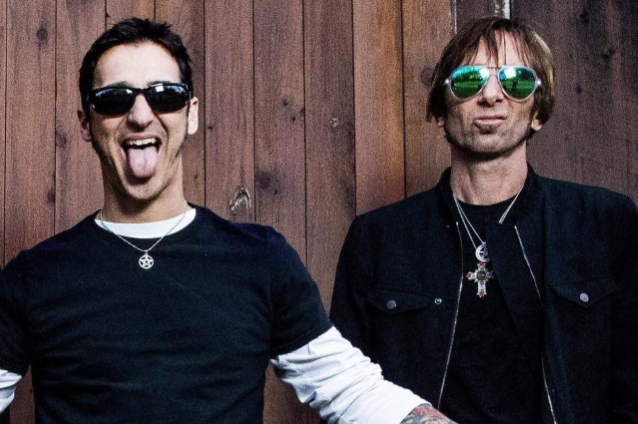 GODSMACK frontman Sully Erna spoke to Meltdown of Detroit's WRIF radio station about Shannon Larkin's addiction to alcohol. The 52-year-old drummer has been sober for about four years now after checking himself into rehab, a decision he later credited with saving his life.

"Yeah, he's an inspiration, man," Sully said about his bandmate. "He's come a long way since the days where he just had this kind of 'F.U.' punk rock attitude and didn't care about what he looked like, what he sounded like, who he insulted when he was drinking. 'Cause he was a bad drunk. He was a blackout drunk, and that's where it's dangerous. Everybody would laugh with him and just think it's funny that he's smashing bottles and breaking lamps in hotel rooms and all that, but at the same time, he doesn't remember anything, and he's calling people horrible names. When you're that kind of an alcoholic, it's not good, 'cause you're either gonna hurt somebody or hurt yourself and not even know you did it the next morning. So I'm glad he got help, because he needed to."

Erna continued: "He dedicated enough of his life to partying, as did we all, and it was just a point where you've gotta just kind of grow up and you have to be more responsible. And if you're the kind of person that can have a few drinks once in a while and enjoy dinner and some wine and things like that and not be an idiot, then all the power to you. Drinking responsibly isn't such a bad thing — alcohol can actually be really fun. But when you're a dangerous alcoholic that's blacked out and you don't know what you're doing or what you did the next morning, you have to understand you have a disease and a bigger problem and do something about it. And he took it [upon] himself to deal with it. We never told him what to do, but he knew that it was getting close to, like — we can't do this much longer, because it was getting to the point where it was interfering with business."

Asked if Larkin's drinking ever came close to fracturing the band, Erna said: "He was calling out the wrong people, not knowing who was who… He would call some female promoter a 'c**t' and that kind of thing. And then he'd come into the dressing room the next day all puffy-eyed and tired-looking and just try to play it off like he has a bunch of energy and he's good, and we're just staring at him. And then he'd go, 'Okay, what did I do?' And I'd go, 'Well, the first thing you probably should do is go and apologize to that lady in the hallway for calling her a c**t last night.' And then he goes, 'Oh, no!' And then he'd go out there groveling. I think that was the breaking point. He came back and he just checked himself in and felt like he had to do something about it."

GODSMACK recently scrapped all plans to tour in 2020 in the wake of the ongoing coronavirus pandemic.

The band will spend the rest of the year working on a new album while mapping out a return to the road in 2021.

GODSMACK's latest album, "When Legends Rise", was released in April 2018. The disc followed up 2014's "1000hp" and was GODSMACK's first release through BMG after splitting with its longtime home, Republic/Universal.