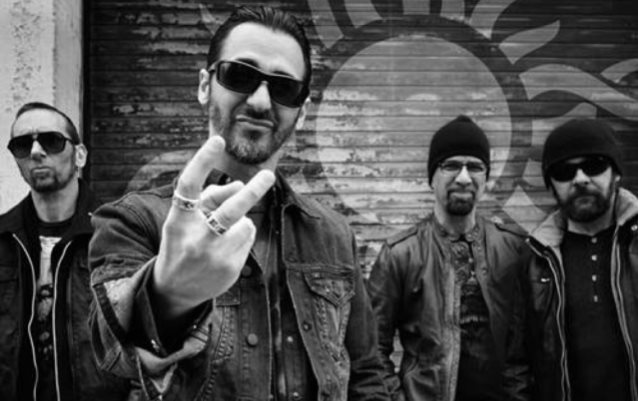 After a lengthy hiatus, GODSMACK's new single, "1000hp" (One Thousand Horsepower),has been the number one most added song to the Rock Radio singles' chart this week. The song is taken from the album of the same name, which comes out on August 5.

GODSMACK frontman Sully Erna told The Pulse Of Radio where the band recorded the album, saying, "We actually built a new GODSMACK headquarters up in the Boston area, so we decided to lease this 4,000-square-foot warehouse and we built one side with the loading dock, so it's just all of our staging, road cases and touring equipment. And then on the other side we did this really cool living room, kitchenette, bathroom, control room, live stage room and we went and tracked the whole record up in the Boston area and obviously came out to California to mix it. So, it's nice now because we're all under one roof. We have everything there and we don't really need to go anywhere else now to either rehearse for tours or to record new music."

The band's sixth studio effort will follow up 2010's "The Oracle" and follows a two-year hiatus.

Erna told The Pulse Of Radio that his original title for the "1000hp" song took things to the next level. "Actually, the original title I wanted to put on the song was '100,000 Horsepower'," he said. "But unfortunately, rhythmically, it was too many syllables and I couldn't make it fit the way I wanted to creatively, so I trimmed it back to '1000 Horsepower', which is still pretty fuckin' powerful, by the way."

Regarding how the track came together, Erna said: "It's one of those songs that surprisingly came out and was written from back to front in, like, an hour. I started putting one thing together with the next, and then Shannon [Larkin, drummer] started jumping in and then we arranged the whole song, and literally within an hour, maybe 90 minutes, this whole song was written and it was one of the last songs that we wrote, and it ended up becoming the first single."

Following the tour cycle for 2010's "The Oracle", Erna told The Pulse Of Radio that years of working together almost non-stop were taking their toll on the group. "You know, it was getting rough," he said. "You know, I'm not gonna lie — the band was getting into a funky place and there was talks about breaking up and, you know, not really staying a band anymore. But you know, I think it was just some time we needed, some time to really reassess the thing and really appreciate what we have as a band. We've always been kind of level-headed about things and eventually we just needed to let a little time pass and let the dust settle."

Erna added that bad blood over the GODSMACK offshoot ANOTHER ANIMAL, as well as his satisfaction with his own solo album "Avalon", led GODSMACK to the brink before they reconsidered.

GODSMACK has yet to announce full tour plans behind the new disc, but the band is confirmed as one of the acts performing at the third annual Aftershock festival, set to take place on September 13-14 in Sacramento.