GODSMACK's SULLY ERNA To Be Joined By STAIND, SHINEDOWN, PAPA ROACH Members For 'Live From The Living Room' Charity Fundraiser

Sully Erna of GODSMACK has gathered some of rock's top voices for his "Live From The Living Room" marathon fundraiser to benefit The Scars Foundation, which he founded. The Thursday, August 6 benefit will stream on his YouTube channel and the Foundation's Facebook page at 8:00 p.m. ET / 5:00 p.m PT and will feature special sets from GODSMACK and Sully solo (accompanied by Chris Lester and Máiréad Nesbitt),plus performances from Aaron Lewis (STAIND),Brent Smith and Zach Myers of SHINEDOWN, PAPA ROACH, Mike Mushok and Adam Gontier of SAINT ASONIA, Nuno Bettencourt of EXTREME and Clint Lowery (SEVENDUST).

"I had always looked for ways to give back and help others in some way after reaching certain levels of success in my life," Erna said. "But I could never really figure out where to dedicate my time and attention and what was important to me, or where I even had experience to offer. One day, I started thinking about my own life and being a survivor of such an extremely rough inner city and that's where all my experience was. It was all the battle wounds and scars I've carried that made me stronger and made me the man I am today. Instead of being ashamed of my imperfections, or hiding from them, I learned how to embrace them and grow from those experiences. I want to share that with people and lend my stories, my experiences, and my theories on how you can overcome challenging times rather than letting them ruin your life.

"And that's why The Scars Foundation is so important to me" he continued. "It's personal. It's my life. And it's important that people who struggle with these mental health issues and 'imperfections,' or 'scars,' as we call them, learn how to embrace them, and show them to the world loudly and proudly!

"Just remember: you're not alone. And we're all imperfectly perfect. Just the way we're supposed to be!"

Beyond the livestream (which will feature a live ticker displaying how much money is being raised throughout the event),a 10-day auction will advance the event with a variety of GODSMACK instruments; bids can be placed here. Proceeds from the live event and auction will benefit The Scars Foundation. All donations made through The Scars Foundation efforts will go to benefit those programs with a proven track record of effectiveness in addressing mental health issues.

GODSMACK's "Unforgettable" recently became the fourth No. 1 rock track from the band's latest album, "When Legends Rise" (BMG). This accomplishment made GODSMACK one of only four rock acts to reach this achievement. The song also marked the 11th No. 1 single in the band's career.

"Unforgettable" follows three previous No. 1 singles from "When Legends Rise": "Under Your Scars", "When Legends Rise" and "Bulletproof", which was certified gold in the U.S. and was also the most-played song at rock radio in 2018. "When Legends Rise" entered the Billboard Top 200 album chart in the Top 10 (No. 8),with four No. 1 placements on other charts: Top Rock Albums, Top Hard Music Albums, Top Independent Albums and Top Alternative Albums. 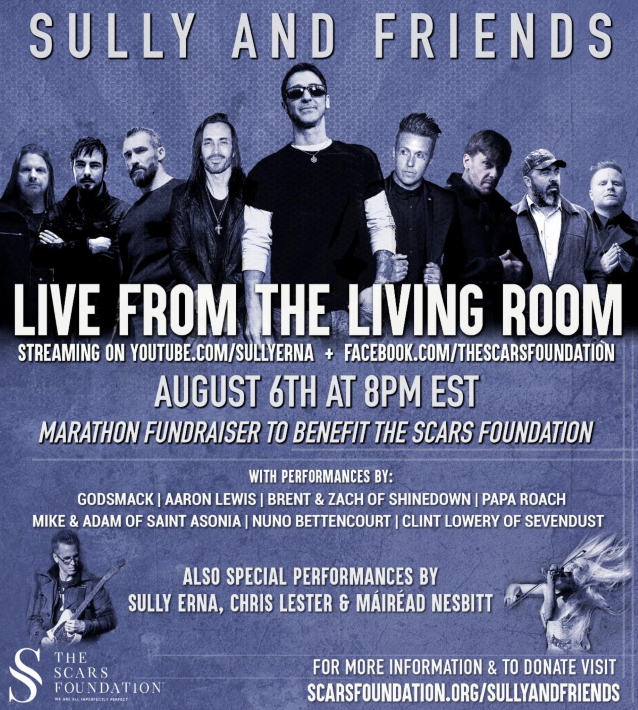