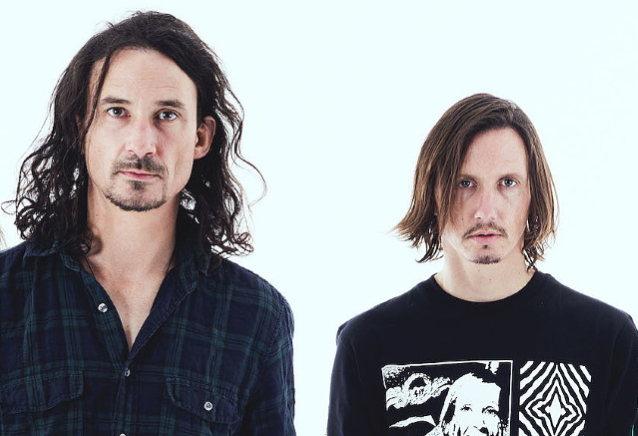 GOJIRA's JOSEPH DUPLANTIER On 'Incredible' Musical Chemistry With His Brother: 'We Don't Need To Talk. We Just Play.'

In a new interview with the "Behind The Vinyl" podcast, GOJIRA frontman Joseph Duplantier was asked if he ever has arguments with his brother and bandmate, drummer Mario Duplantier. He responded (as transcribed by BLABBERMOUTH.NET): "Sometimes, but we're pretty patient. We have anger. I wouldn't say we have anger issues, but sometimes I wonder. We respect and love each other very much. We're aware that we're dealing with a project that is very life-defining for us, and there's a lot of people around us. So we're pretty patient. Sometimes I can feel and I can tell — and he would say the same — that sometimes we just can't stand each other. For a little bit — for, like, an hour or two hours. And then we'll be, like, 'You know what? I'm outta here.' We will not start screaming, for example, if something is not happening. Maybe once a year or twice a year we'll raise our voice on each other and it's pretty nasty, but it's very short. So, yeah, we're not punching each other in the face or anything like that."

On Monday, GOJIRA announced details of a fall U.S. headline tour. The new dates, which will feature special guests KNOCKED LOOSE and ALIEN WEAPONRY, are set to kick of October 11 in Salt Lake City, Utah at The Union and continue through a performance at Cleveland, Ohio's The Agora on October 29.

A special BLABBERMOUTH.NET presale began on Tuesday, May 4 at 10:00 a.m. local time and will end on Wednesday, May 5 at 10:00 p.m. local time. When prompted, type in the presale code "AMAZONIA" to access tickets before the general public. General on-sale will be this Friday, May 7 at 10 a.m. local.