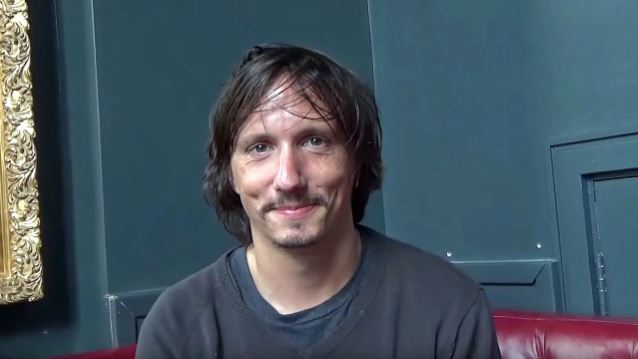 Impact metal channel conducted an interview with drummer Mario Duplantier of French progressive metallers GOJIRA before the band's August 28 concert in Dublin, Ireland. You can now watch the chat below.

Speaking about the progress of the recording sessions for GOJIRA's follow-up to 2012's "L'Enfant Sauvage" album, Mario said: "The next step is we have to finish the guitar, the bass, the vocals, mixing the album and it will be done. But the drums are foundation, so the compositions are here. So the recording process is almost a detail. The most important [thing] is the songs. So the songs are here."

Asked if it's true that GOJIRA does a lot of writing on the road, Mario responded: "Yeah, of course. We try to stay creative all the time, and we're not lucky enough to just stay home for two years, composing and taking time. So when we're on the road, we have no choice [but] to try to find some ideas, even if it's on the bus… sticky and messy bus. We just have to take a guitar and [I play along to it] on my knees, and we try to find ideas, riffs. So for this album, actually, the composing process was very long, because we started probably during the SLAYER tour in the U.S. In 2013, we toured with SLAYER one month and a half, and every day on the bus, we tried to find riffs. We worked a lot on the computer in the bus."

GOJIRA guitarist/vocalist Joseph Duplantier previously told RockSverige.se that fans can expect to see the band's next album sometime in early 2016. He explained: "We were [originally] aiming [to release it in] October this year, but we had to push the recording. I think the difficulty was… Mario brought a lot of ideas on the table… very challenging drum patterns. It's less complicated than before. It's more… I wanna say it's more straight to the point. That's what we were doing since we started. We're getting rid of layers and complicated things, just to keep the core of the idea. There's always an idea behind a song, and sometimes it gets too crowded. So we're trying to keep the core of each idea. So the energy that Mario has, it's a big signature for our band, GOJIRA — the drum patterns and the double-kick stuff. And I have my own impulse. So it's mainly Mario and me composing… I think the fans know that. And one of the biggest difficulties is to come together on these songs and to create something that, okay, we both feel like, 'This is it. This is the song.' It took a while to get there. Sometimes, on previous albums, Mario wouldn't be totally satisfied — like three [or] four songs — and for me, I [would be] like, 'Eh, this song is just like a drum solo with guitars on it.' And this time, I think we really found something — a balance. [It's] very powerful and exciting. We're very excited about the new record."

GOJIRA's fifth album, "L'Enfant Sauvage", sold almost 11,000 copies in the United States in its first week of release to debut at position No. 34 on The Billboard 200 chart.