Norwegian black metallers GORGOROTH will release a new live album, entitled "Live in Grieghallen", in June via Regain Records. According to a press release, the CD was recorded live at Grieghallen in Bergen, Norway by Eirik "Pytten" Hundvin and features Infernus on bass and guitar, Gaahl on vocals, and Garghuf on drums.

"Live in Grieghallen" was mixed and mastered by Nico Elgstrand (ENTOMBED) and features all the GORGOROTH "essential songs" from the band's back catalog performed live. 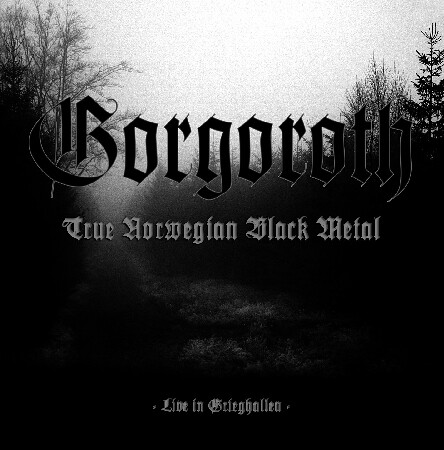 All music and lyrics by Infernus, except track 1 (lyrics by Hat), track 2 (music by Tormentor) and track 4 (music by King). Recorded live in studio in 2007/2008. Engineered by Pytten at Grieghallen Studios in Bergen and Nico Elgstrand at Threeman Recordings in Stockholm. All bass re-recorded by Infernus at Threeman Recordings. Mixed by Nico Elgstrand. Mastered at Cutting Room in Stockholm by Infernus and Mats Lindfors. Cover design by Magnus Wolfhart.

Video footage of GORGOROTH's infamous February 1, 2004 concert in Krakow, Poland will finally will see the light of day. Metal Mind Productions will release the first-ever GORGOROTH DVD, entitled "Black Mass Krakow 2004", featuring the legendary Polish concert, on June 9 in Europe and June 10 in the U.S.

Check out photos from the gig at this location.

GORGOROTH guitarist Infernus recently announced plans to "commence legal proceedings" against GORGOROTH singer Gaahl and bassist King ov Hell over the rights to the group's name. "If everything goes as planned, the case could go before the courts in June this year," according to a posting on the guitarist's web site. "Infernus is considering not only taking the band name conflict before the courts, but also the matter of certain allegations and untruths propagated about him."