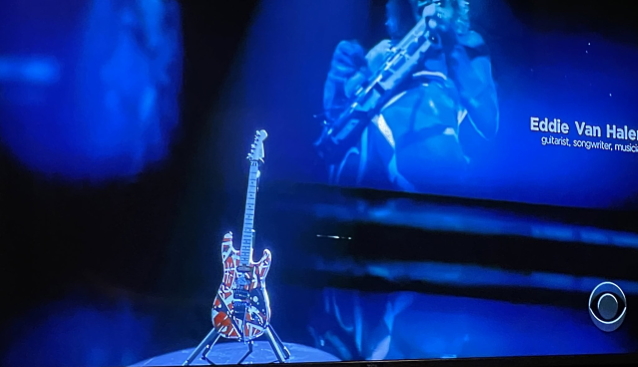 Grammy executive producer Ben Winston has defended The Recording Academy for the way it recognized Eddie Van Halen at this year's Grammy Awards.

The legendary VAN HALEN axeman was included in Sunday night's "In Memoriam" segment at the 63rd annual Grammy Awards, where The Recording Academy paid tribute to musicians who died in the past year. At one point in the segment, Eddie Van Halen's name flashed across the screen over a clip of him shredding a guitar solo while a spotlight shone on his iconic red-white-and-black guitar.

Eddie's son, Wolfgang Van Halen, later revealed in a social media post that he was approached by the Grammy producers to perform his father's signature guitar instrumental "Eruption" during the broadcast but that he declined. He also expressed his disappointment that Eddie was shown for only "15 seconds in the middle of four full performances for others we had lost." Wolfgang added: "What hurt the most was that he wasn't even mentioned when they talked about artists we lost in the beginning of the show. I know rock isn't the most popular genre right now (and the academy does seem a bit out of touch),but I think it's impossible to ignore the legacy my father left on the instrument, the world of rock and music in general. There will never be another innovator like him."

In a new interview with Variety, Winston confirmed that Wolfgang was asked to appear on the program and he explained the reason Van Halen ended up not getting a longer tribute during the event.

Ben said: "We had a call with [a rep for] Wolfgang before the show, and I asked him if he'd be willing to come on and play. He felt he didn't really want to do that, and I offered up eight or nine guitarists who maybe could. But instead, he felt like we should play a video of Eddie himself, because nobody could play like him, so that's what we did."

He continued: "I would have loved for it to be longer than it was, but Eddie was the only person in the whole 'In Memoriam' to play their own music, with no other faces being seen. I felt that was an appropriate tribute to him, but if Wolfgang didn't, I'm sorry about that, of course.

"It's such a horrific thing to lose a parent. We did the best that we felt we could."

Wolfgang wasn't the only one who felt The Recording Academy should have done better. SiriusXM DJ Eddie Trunk called out how short the memorial was in an Instagram post and noted, "So in a more than three hour show this is all the #grammys could muster for an ICON?! I am beyond outraged and disgusted."

Former VAN HALEN singer Gary Cherone, who took over when Sammy Hagar left the group (or was fired, depending on whom you ask) in 1996, was also upset by the tribute.

"Maybe an artist that reimagined how one plays an instrument, who continues to influence generations of musicians and, literally changed the course of rock 'n' roll deserves more than fifteen second at the Grammys," Cherone wrote on Twitter.

The Recording Academy regularly comes under fire for failing to include musicians who died in the past year, largely due to the time limitations of the broadcast. More than 800 names were considered for inclusion this year, according to Variety. On its web site, The Recording Academy included all of those names on a more comprehensive list, noting that the televised "In Memoriam" segment is meant to only highlight some of the artists who died this year, not necessarily all.

Eddie passed away in October at the age of 65.