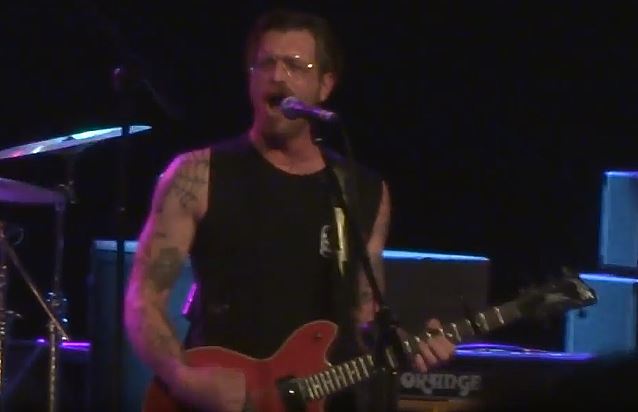 A reporter from the French newspaper Le Monde has shot video footage of dozens of people fleeing the Bataclan concert hall Friday night (November 13) in Paris under gunfire from terrorist attackers. The graphic clip, which was filmed from an apartment balcony, includes footage of a woman who makes the desperate decision to climb out of a second-story window and hang precariously above a back alleyway. Also visible in the video is at least one person writhing on the ground as additional victims pour out the theater, some of them bloodied or limping. Some of the victims collapse outside the door, and remain motionless throughout the video. Another victim is dragged down the alleyway by a friend. Sporadic gunfire can be heard as the victims leave the building.

Le Monde, which has posted the footage, said the video was filmed at 10 p.m. at Passage Saint-Pierre Amelot in the 11th arrondissement of Paris.

Daniel Psenny recorded the video from his apartment window and was later shot in the arm as he attempted to help people shelter in his apartment, and is being treated at the Georges-Pompidou hospital. He said the bullet was fired from a window.

Psenny told Le Monde he was watching TV and heard what he thought was firecrackers. "But the noise was loud, so I went to the window," he said, "I live on the second floor, and my apartment overlooks the emergency exits Bataclan.

"Everyone was running from all sides, I saw guys on the floor, blood... I understood that there was something serious. I asked what was happening. Everyone rushed back to the Rue Amelot and Boulevard Voltaire.

"A woman was clinging to the Bataclan window on the second floor. I thought of the images of 9/11 [attacks on the World Trade Center]."

Psenny said that he stopped filming and went down to the street to aid the injured. "I opened the door of the building. There was a man lying on the sidewalk," he recalled, "With another man we tried to drag him to safety in the lobby.

"At that moment, I was hit by a bullet. I do not know [what happened], my mind is a blank. But I remember it felt like a firecracker exploding in my left arm, and I saw that it was spurting blood.

"I think the shooter was at the Bataclan window. The man we saved was shot in the leg. He was an American. He vomited, he was cold, we thought that he would die.

"We called the emergency services, but they could not evacuate us. I called a doctor friend who told me how to make me a tourniquet with my shirt. And we stayed there until the assault was over."

Witnesses said four attackers stormed inside the 1,500-seat Bataclan hall, a well-known concert venue on the Boulevard Voltaire, from the back and fired several rounds from Kalashnikov AK-47 rifles at the crowd who were watching Californian rock band EAGLES OF DEATH METAL.

The reported death toll so far at the Bataclan theater is 87.

Among those confirmed to have survived are the members of EAGLES OF DEATH METAL.