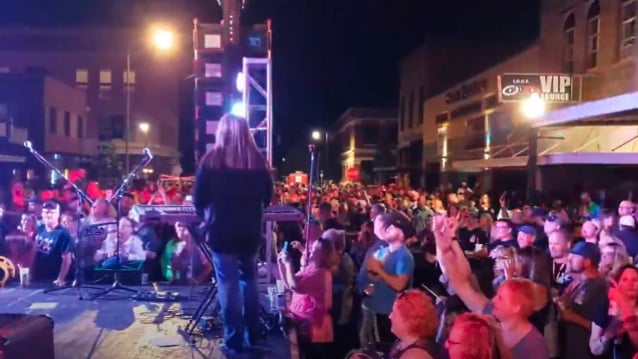 GREAT WHITE Plays Concert In North Dakota With No Restrictions In Place: No Social Distancing, No Masks (Video)

**July 11 UPDATE**: Earlier tonight, GREAT WHITE released the following statement to BLABBERMOUTH.NET via the band's publicist: "GREAT WHITE would like to address our Thursday, July 9, at First On First Dickinson Summer Nights concert in North Dakota.

GREAT WHITE played an outdoor show this past Thursday night (July 9) in Dickinson, North Dakota as part of "First On First: Dickinson Summer Nights". Video footage of the concert is available below. More video, shot from a different location, can be found here.

As of Saturday (July 11),there have been a total of 4,243 confirmed coronavirus cases in North Dakota. A total of 87 people have died so far in the state as a result of COVID-19. 83 percent of those who have tested positive for COVID-19 in North Dakota to date have recovered from the virus.

Earlier in the month, former GREAT WHITE and current JACK RUSSELL'S GREAT WHITE singer Jack Russell blasted people who refuse to wear a mask in public spaces to protect others from possible infection.

Russell addressed the hot-button issue as lawmakers push harder for their constituents to wear face masks to limit the spread of coronavirus. President Donald Trump has been loath to wear a mask, despite the advice of public health experts.

Asked in an interview with Austria's Mulatschag if he goes out often while in quarantine, Russell — who lives on a 45-foot yacht in Redondo Beach, California — said: "No. I go to the store when I have to. There's no need to be out [in public places]. People don't take it seriously — they don't take the virus seriously. It's sad.

"I don't know what everybody else out there is thinking — they may think I'm full of it — but I take this very seriously.

"It's no small wonder that when you open all these places up, 'Gee, the numbers [of coronavirus cases] rose up.' It's, like, what did you think was gonna happen? It's, like, 'I took my mask off and I got COVID.' Well, what a big surprise that is.

"People just don't think. They come down to the beach down here and they wanna pretend like [the virus] doesn't exist. Well, that's fine. If you wanna get sick, that's great. But put your mask on for me, because I've got my mask on.

"The numbers, the way it works out, if I just wear [my mask], I'm not that safe. If you put yours on too, I'm 70 percent safe as opposed to being zero-point-something [safe]. It's amazing the amount that it changes.

Earlier this year, Kendall told Rockbandreviews.com that he and his GREAT WHITE bandmates have "been going crazy lately" working on material for their next album. The effort will mark GREAT WHITE's first collection of new songs with singer Mitch Malloy, who joined the group in 2018 following the departure of Terry Ilous.

As the singer(Great White) said, “the best venue, for Rock n Roll in the country right now” North Dakota ❤️