Veteran California rockers GREAT WHITE will release their new album, "Rising", in North America on April 21 via Shrapnel Records. The CD was issued in Europe on March 13 through Frontiers Records.

Since reuniting in January 2007 to perform a benefit concert, GREAT WHITE has moved forward with the successful release in the summer of the same year of their return album "Back To The Rhythm", a record which was hailed by critics and fans as a return to the heydays of the band. After a world tour that celebrated the first 25 years of GREAT WHITE and that brought them for 14 concerts to Europe, bass player Sean McNabb opted out and was replaced by Scott Snyder (ex-RAMOS, ACCOMPLICE).

The band (which of course includes longtime members by Jack Russell, Michael Lardie, Audie Desbrow and Mark Kendall) went back to the studio and produced the brand new album "Rising", once again a tribute to the GREAT WHITE root sound with rock, blues and strong melodic elements. The Southern California blues hard rock band first took a bite out of the rock scene in 1984 and since then has achieved worldwide success, encompassing sales of over six million records. They received a Grammy Award nomination for "Best Hard Rock Performance" for the song "Once Bitten, Twice Shy" and earned a double platinum certification for the album "…Twice Shy".

"I think had we done this record back in the day it would hold up to anything we've ever done and also fit perfectly," says Kendall. "When we make music with Jack singing and me playing guitar along with Michael Lardie, it's going to sound like GREAT WHITE no matter what era."

"The new album, for me, was an extension of the affection we have for playing music together," says Lardie. "I believe the songs are a bit more introspective true to life experience for us, not all the songs were written as we went into the studio, so I feel there is a freshness to the tracks as a result."

According to Russell, "The band is in great shape and everyone is excited about the New Year. We can't wait to tour and play some of the new music live. Our new bass player Scott is a great guy who can really play. The stuff he wrote to our new music is awesome!"

The soulful, blues-based signature sound that turned songs like "Face The Day", "Rock Me" and "Save Your Love" into international hits, can also be found on the new songs which are currently being mixed by the band’s keyboard player Michael Lardie. The late '80s were boom years for the band, marked by non-stop touring with some of the biggest bands of the era and playing also in Europe and Japan. GREAT WHITE recorded two more albums for Capitol — "Hooked", which was certified gold and "Psycho City". Although Capitol issued a best-of compilation in 1993, GREAT WHITE had already departed the label to begin work on their next studio release, "Sail Away", released on Zoo Records in 1994 supporting it with relentless touring. Their next release, "Let It Rock", in 1996, GREAT WHITE then released on Portrait Records/Sony. "Can't Get There from Here" was released in 1999 and was the last album before the reunion of 2007. 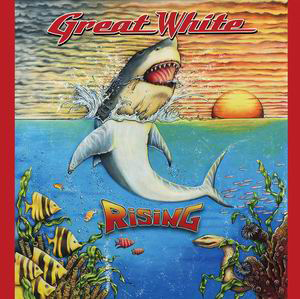