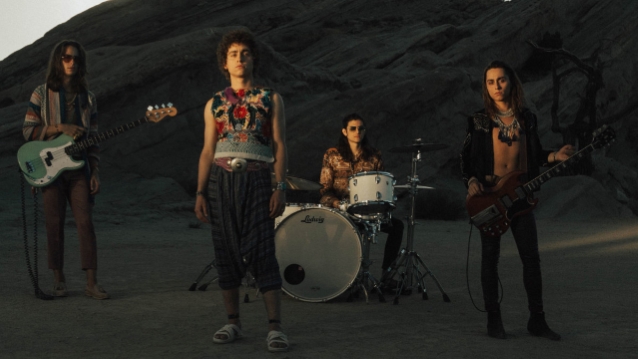 Titled "Anthem Of The Peaceful Army", the record will contain 10 songs, including "When The Curtain Falls", which was made available earlier this summer.

A 45-second social media teaser video for "Anthem Of The Peaceful Army" can be seen below. An accompanying message reads: "Those of us who cannot hear it, feel it. At the dancing of a heartbeat, is a reminder that humans love. I know that first in darkness, like a great drum in a mother's chest. The anthem of a peaceful army. To save all the world."

The "When The Curtain Falls" music video was filmed in Southern California and conceived and directed by acclaimed visual effects artist Benjamin Kutsko ("The Curious Case Of Benjamin Button", "Iron Man").

GRETA VAN FLEET performed "When The Curtain Falls" on the July 26 episode of "The Tonight Show Starring Jimmy Fallon".

Asked how the making of the new disc was different to the way GRETA VAN FLEET recorded its first two EPs, "Black Smoke Rising" and "From The Fires", guitarist Jake Kiszka told the DOMKcast: "It has some commonalities, but as far as [how] those two things differ, we had the ability to sit down with all the material that have written and go, 'Okay, now we have the ability to put something together that is a complete thought.' Whereas EPs are just kind of concepts — just short pieces — where now we have something that is one full complete thought.

"Because we'd stopped touring — we had pretty much been rigorously touring for the last maybe year and a half — we had these two weeks where all of this material started to kind of come to us," he continued. "I'd say about 50 percent of the album was material that was spontaneously written within the actual recording process of the album. So we started tracking a bunch of things that we've been writing while recording, and we'd just throw it down at the end of the night and have [basic] tracks to work from.

"In the similar light to 'Black Smoke Rising' and 'From The Fires', there was a collection of material that spanned probably about three years ago and material that was written right on the spot. And as we went along, [we would go], 'Okay, this song kind of fits here, and that leads to this,' and that helped us navigate what we wanted to put on the album."

GRETA VAN FLEET played in Michigan clubs for six years before rocketing to the top of the rock radio charts last year with "Highway Tune".

As the new day unfolds… pic.twitter.com/TggP7xI5Te