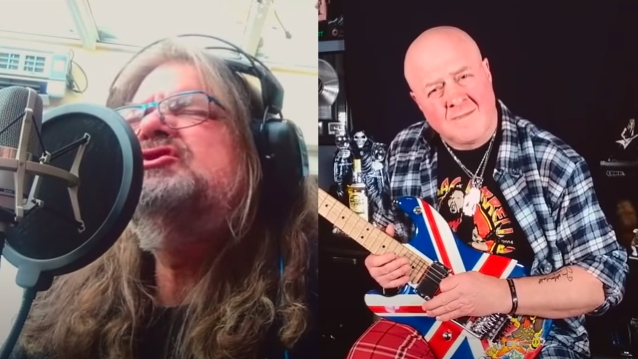 "It's all [renowned Internet guitar teacher] Steve Stine's fault," quips Bowcott. "He's the guy who was nice/dumb enough (delete as you deem fit) to extend the invitation. I knew he'd get a great rhythm section, but it obviously all hinges on the singer as we're talking about a song sung by the late, great Ronnie James Dio, here. So that was my first, pivotal question. 'It's our mutual friend and your old bandmate Steve Grimmett,' was the reply, and so I immediately said, 'Hell yes, I'm in!!' In my humble opinion, there are only a handful of singers who can do RJD justice, and Steve is definitely one of said few."

Stine sent Bowcott a rough guide track to record his rhythm and lead guitar parts over. The same was done with Grimmett, bassist Brian Hollenbeck (HAIRBALL) and session drummer Joel Stevenett. "We all also shot videos of ourselves doing the deed too, and then sent our stuff back to Steve," Bowcott reveals. "Steve G in Swindon, England; Steve S in Kindred, North Dakota; Brian in Minneapolis; Joel in Salt Lake City; and me in Fort Wayne, Indiana.

"I only got to hear and see the final sonic and visual result [Sunday] morning," Bowcott concludes. "I was blown away. All played amazingly, the video edit is kick ass, Mr. Stine's mix is top-shelf. And as for Mr. Grimmett's vocal performance? One word: 'Damn!' I sincerely hope we did this amazing song justice — one thing's for sure, I had a blast doing it!"

Grimmett has spent the last decade and a half fronting STEVE GRIMMETT'S GRIM REAPER, with which he has released one EP, "Alive And Kicking" (2011) and two full-length albums, "Walking In The Shadows" (2016) and "At The Gates" (2019).

In 2014, Bowcott joined STEVE GRIMMETT'S GRIM REAPER on stage, marking the first time Steve and Nick performed together in more than 25 years.

Grimmett had his right leg partially amputated in January 2017 after an infected wound on his foot spread to the bones in his leg part way through the group's five-week tour of South America.