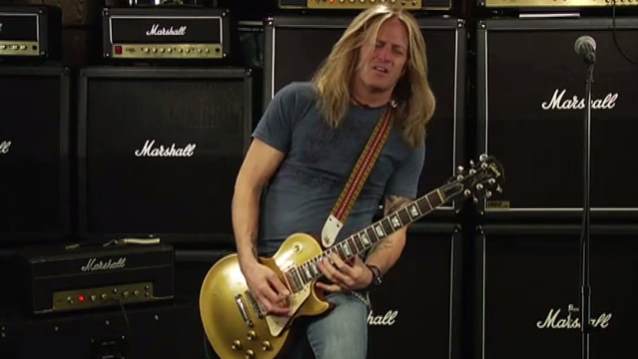 Doug Aldrich, WHITESNAKE's guitarist of the past 11 years, is leaving the band "to pursue a solo career," according to the group's founding singer and mainman, David Coverdale.

Aldrich has since issued the following statement regarding his departure from WHITESNAKE:

"Thanks to my big bro David for such a killer run together!! So many songs, tours, projects, always inspiring and pushing each other! Mostly I want to thank the loyal WHITESNAKE choir and fans around the world. You have been so amazing to me and it's been an honor to play for you with WHITESNAKE. I love you, guys, and I'll see you all again. Thank you so very much for your unending support.

"Also, not sure how or where the info started about a solo career, but this is not true or correct information. I have no plans at this time to go solo. I'm just not in the WHITESNAKE/David Coverdale band anymore.

"I'll let you guys know what I'm doing [as soon as possible] but for now please know I very much appreciate your support and will hopefully do a statement with my brutal brother [David Coverdale] shortly."

Asked in a 2013 interview with Classic Rock Revisited how he has been able to stay in WHITESNAKE so long considering how "tough on guitar players" David has been throughout the years, Doug said: "Honestly, I think he really cares about how hard I work and how much I care about his musical vision. I might make a mistake and overstep my bounds, now and then, but David knows I am only doing it because I really care. I think that is a part of it. My style fits in with him, as well. Reb [Beach, WHITESNAKE's other guitarist] and I really work well together for WHITESNAKE as well.

Doug added: "I think for me, [Coverdale] is at the point to where he does not need to prove anything to anybody, but he still wants to move forward, anyway. I love that. At the same time, I'm going, 'Let's try this!' I am not pushing him, but I am enthusiastic about our music. I love the guy and he is one of a kind and I have a lot of respect for the fact that he is still going for it. I love being in WHITESNAKE and David knows it. By the same token, if David said to me that he wanted to go back to any one of the past guitar players, I would absolutely respect that and I would be appreciative of everything that we've done together."

Regarding how he came to join WHITESNAKE, Doug said: "When David first contacted me about doing WHITESNAKE, I had heard he was going to reform the version of WHITESNAKE with John Sykes. I said, 'David, there is no reason for you to talk to me if you're thinking of getting back with Sykes. I have my own thing to offer and I am not going to be in a band with him.' David said,'No, no, no, I want you.' So I thought, 'Yes!' 'Okay, cool. Let's talk.'

"There was a period, in 2003, where he said that he might do something with previous members and he wondered if I would consider being a part of it. At the time, I said no because I hadn't put my mark on WHITESNAKE yet. It wouldn't have felt right to me at that early time. Now we have 30-plus songs together and I'm very proud of them. Now we jam with past members all the time and its fun. I am humble and inspired working with David and very thankful for our relationship."

Aldrich has spent the past few months performing with Raiding The Rock Vault — dubbed "the ultimate classic rock concert experience" — which plays the LVH Hotel And Casino in Las Vegas four or five times a week. Boasting the ultimate set list, the show takes audiences on a magical musical journey, traversing the genre's history from the '60s through the '80s.

It is with a heavy heart we bid adieu to super guitarist Doug Aldrich who is leaving WS to pursue a solo career. Fare Thee Well, My Brother!