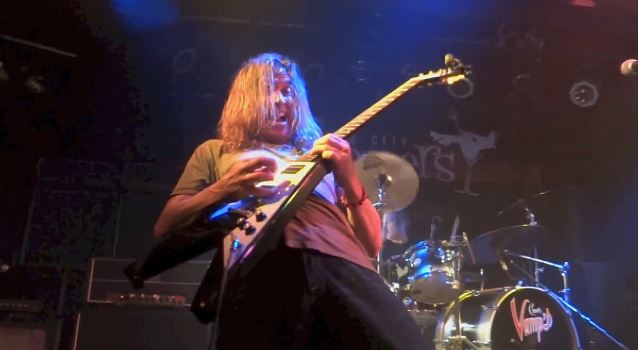 Former MEGADETH guitarist Jeff Young says that he has "zero interest" in returning to the group, explaining that "the band is done."

Jeff's entire career with MEGADETH was spent recording and touring in support of the band's 1988 platinum-selling album "So Far, So Good...So What!" He left MEGADETH shortly after an appearance at the Monsters Of Rock festival, with the band's leader, Dave Mustaine, accusing the guitarist in the press of lying, saying that "everything that came out of that guy's mouth was just the highest grade of pure horseshit."

Asked by a fan on Facebook what his thoughts are on "the current MEGADETH situation" — presumably referring to the band's recent split with guitarist Chris Broderick and drummer Shawn Drover — and whether there is any chance of him going back to the group, Young responded: "I [have] zero interest in 'the MEGADETH situation.' The band is done. Put a fork it it."

Jeff made headlines in December 2009 for accusing Mustaine of, among other things, "dissing, exaggerating and just plain lying on some level about nearly every talented musician that has passed through his dysfunctional little ensemble." He also also disputed Mustaine's claim in an interview that Young's drug problem led to MEGADETH's 1988 Australian tour being called off and the group being "banned" from performing in the country.

Drover quit MEGADETH on November 25 "to pursue [his] own musical interests." His statement can be found at this location. Broderick announced his departure from MEGADETH a few hours later, saying that he was exiting the group "due to artistic and musical differences."