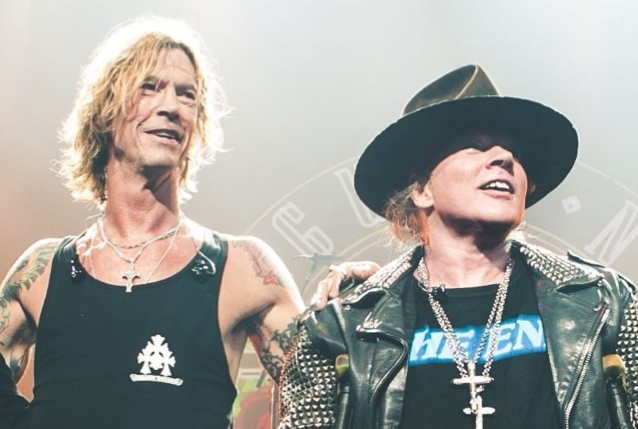 Duff McKagan has told U.K.'s GQ magazine that it's "much more fun" playing the huge stadiums with GUNS N' ROSES now than it was performing at the small, punk rock venues when the band first started out.

"The thing about those early, crazy GUNS gigs is that I do remember them all," the bassist said. "They all happened before I was too far gone with booze, so I have all those memories. And Axl [Rose] and Slash and I will talk about those gigs even now. Axl has the most amazing memory for detail. It's fun to talk about them, but I am so glad I don’t have to live through them again.

Asked if Axl and Slash have mellowed with age, Duff said: "Well, Slash was always pretty mellow... The thing about both those guys, but especially with Axl, is that there are no half measures. Axl never just phones it in. When it comes to his intensity level, he’s at 110 percent. And the GUNS community is so incredible that you can't not deliver every time you play. We've traveled the world, and when you see women in a full hijab rocking out and flashing the devil horns, it's just full-on. And they are just as excited about the band as the guy in Arkansas with the mullet who is headbanging and going crazy. GUNS unites a whole cross-section of humanity and it is just amazing to be a part of. So to answer your question, the intensity is definitely still there, we just don't burn down cities when we are offstage like we used to."

GUNS N' ROSES recently announced the fall 2019 U.S. leg of the "Not In This Lifetime" U.S. The trek will kick off September 25 in Charlotte, North Carolina and will include two back-to-back nights on Friday, November 1 and Saturday, November 2, in Las Vegas at the legendary Colosseum at Caesars Palace, GN'R's most intimate venue since the 2017 performance at the Apollo Theater.

These eight shows join a previously revealed run of major festivals that will bring the band to cities across the United States, along with two colossal stadium dates in Mexico. The wide range of festivals GN'R will hit include Louder Than Life, Austin City Limits, Exit 111 and Voodoo Music + Arts Experience.

"Not In This Lifetime" is now believed to be the second-highest-grossing tour of all time, having generated more than $500 million since it began three years ago.

Since the end of the tour last year, guitarist Slash and McKagan have both returned to solo endeavors.