According to ChineseDemocracy.com, the April 2009 issue of Bass Player magazine features an extensive interview with GUNS N' ROSES bassist Tommy Stinson in which he discusses the songwriting and recording process for "Chinese Democracy", among other topics. A couple of excerpts from the chat follow below.

Bass Player: How did you get the gig with GUNS N' ROSES?

Stinson: My friend Josh Freese was playing drums with the band. I ran into him in a Hollywood rehearsal hall, and he mentioned that Duff [McKagan] had quit, then he asked if I knew any bass players. We just kind or laughed about it, because it sounded like a funny thing for me to go audition for GUNS N' ROSES. GUNS N' ROSES were never my thing when the band first came out — they just weren't my style. I thought at least it would be fun to play with Josh. But I learned five or six songs for the audition. We basically just jammed, and it was pretty fun. They seriously needed a bass player, so they asked if I'd do it.

Bass Player: Why do you think you were the right guy for this gig?

Stinson: The only thing I could grasp at is that I have the kind of punk-rock attack that Duff did. He wasn't really a metal guy — he had punk roots. On the other hand. he's got sensibilities that are different from mine. I couldn't place exactly what they are — they're unique to each one of us.

Bass Player: Do you and Duff know each other?

Stinson: I met him a few years back, and he seemed like a really sweet guy. He didn't seem to have any issues with me — I don't think he wanted the gig anymore.

Stinson: I came in around '98 when the band was still writing the record. It was Paul Tobias and Robin Finck on guitar, Dizzy Reed andChris Pitman on keys, Josh on drums and me. Everybody was just slowly starting to bring in ideas. We were set up at Rumbo Recorders, a big studio out in the middle of nowhere. A funny thing — Captain & Tennille own it. The whole thing looks like a boat. Anyway, we all just started hammering ideas out. Essentially it was eight guys collaborating. To be thrown into that kind of environment — eight guys from very different walks of life — was very crazy, I'd never worked in that way, but it was cool. There were guys who'd never ever made a record putting out their ideas. At first, those of us who'd actually made records thought their ideas sucked, but there were also some good ones.

Bass Player: How did you work out your ideas in a civil way?

Stinson: We each had to give reasons for liking or disliking something — you couldn't just be bull-headed. We had to function as a democracy or we'd end up hating each other. Collaborating was good for that. I think every one of us learned a lot from it.

Bass Player: "Street of Dreams" stands out for having a lot of cool, counter melodic bass work.

Stinson: That's definitely one of the places where I tried to play melodically. Axl (Rose) had the majority of that song written, and I brought in the bridge bass line and progression.

Bass Player: It has a few licks that seem to reference Duff's playing. Was that intentional?

Stinson: When I started hammering out those GUNS N' ROSES songs, I started to really dig into what Duff was doing — I really liked the stuff he played. I'd be lying if I said his playing didn't seep into my subconscious — like the way he uses grace notes. And I wouldn't be afraid to say I stole some of his stuff.

Bass Player: Josh Freese left GUNS N' ROSES in 2000, and was replaced by Brain Mantia. What did that mean for the tracks you recorded with Josh?

Stinson: I had to redo them. I probably ended up completely re-recording each part five or six times over the years. It was tough. What really happened was the record company stood back and left Axl to his own devices. Axl had all these ideas, and he needed somebody to help interpret what he wanted. He had to basically produce himself, and that's not what he went into this wanting to do. There are a lot of reasons the album took so long to make, but I think the record company really dropped the ball on this one.

Bass Player: What do you see as the root cause for that?

Stinson: I think everything changed when Geffen merged with Interscope. When that happened, Axl was told that [A&R executive] Jimmy Iovine would play more of a role in making the album happen. What Jimmy did instead was throw other people into the mix who weren't very capable.

Bass Player: What happened when producer Roy Thomas Baker was brought in?

Stinson: He wanted to re-record everything, because he felt he could get better tones. In my opinion, he wasted many years and many millions of dollars trying to get us better sounds that we could have addressed in the mixing stage. I'm not a proponent of his style of producing. I think Iovine put Roy Thomas Baker in the producer seat because he didn't think the raw sounds were good enough. Then Roy came in and would try every Marshall guitar amp in a five-state area to find just the right guitar tone. And he wanted to do that for every single part on the album.

For more of Stinson's interview with Bass Player, visit BassPlayer.com. 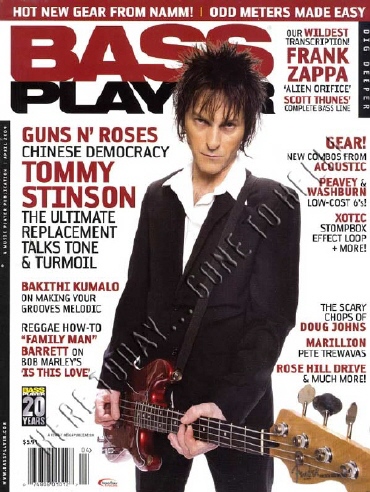